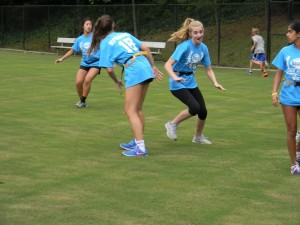 Worry permeated the school on Friday morning, Sept. 18 as the patter of rain persisted well past the hour of noon. The fateful announcement confirmed students’ suspicions, as Mrs. Culp’s voice on the intercom interrupted the constant chatter of the school.

The news was closely followed with a collective sigh from the student body; Powder Puff was postponed for a week. Girls and guys alike experienced mixed feelings of disappointment and excitement for the delay, which only increased the hype around the games, rescheduled for Sept. 25.

In past years, many have complained that coaches take the game too seriously and often get too involved. In hopes of curbing the overzealous attitude, organizers recruited more coaches for each grade in order to avoid having a single, power-corrupt coach. Furthermore, complaints about how only some girls got playing time resulted in changes in the traditional rules, and coaches are now required to play everyone evenly. “I wholeheartedly support this new rule,” said sophomore Harrison Lewis. “The powderpuff games are played for fun, and making it too competitive by only allowing some girls to play undermines the whole point of the event.”

Despite the hype before the games, student turnout was poor. The freshman team, led by captain Kayla Ross, managed to pull off a victory over the sophomore team, led by captains Sarah-Ann Ninan and Emma Lellyett. “The game was a constant back and forth,” said freshman Cole Campbell. “Despite losing, the sophomore team showed great sportsmanship. I’m excited for next year.”

The juniors, despite having many girls signed up to participate, only saw four show up: Zoe Weitzner, Alyse Greenbaum, Katy Leitz and Molly Jacoby. In order to meet the minimum requirement for the number of players, the juniors recruited freshmen Holland Carlton, Kayla Ross and Joelle Zelony to play on their team. With the additions, the juniors were able to defeat the seniors in their heated match, resulting in much controversy. “Although it was a great game, I don’t count it as a loss,” said senior Carly Shoulberg. “The inclusion of freshmen on the junior’s team should be means for disqualification.”