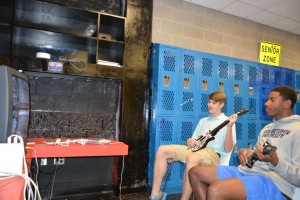 Seniors Bailey O’Sullivan and Spencer Hemmingway duke it out in a classic match of “Guitar Hero” in the Senior Cellar. Photo: Jordan Harris

Inside Pace Academy’s Inman Center and adjacent to the athletics office sits a room that is home to 107 new tenants for the 2015-16 academic year. Inside, members of the Class of 2016 can be seen crowded around televisions playing video games such as “Guitar Hero” and “Madden NFL.” Others can be found sitting on couches socializing about school, extra-curricular activities or life in general. Welcome to the Senior Cellar, Class of 2016 edition.

Inside the cellar sits a large red couch that faces two TVs: a 60″ flat screen and a smaller, basic television. Several cases containing video games are stacked next to the TVs. While it may not seem like much, some of the seniors really enjoy the Senior Cellar’s entertainment center. “It’s by far the best part of the room,” said Jake Richards. “I enjoy the cellar because you can sit down and play with your friends.”

When you take a look around, you may notice the impressive designs on the walls. The theme for the 2016 Seniors is “DARK KN16HTS.” On one side of the cellar, there is a painting of the Joker with the famous saying, “Why So Serious?” The other side consists of a black wall painted with the Dark Knight symbol.

A variety of games are popular in the entertainment center. Often, on the smaller TV, the once-again-popular game “Guitar Hero” is played. While it debuted in 2005 (the seniors were in second grade then), most of the seniors seem to really enjoy the guitar simulation series. One senior, however, stands above the rest. Spencer Hemmingway scorches any competitor who dares to put his hand on an opposing guitar. “I spent a lot of time practicing ‘Guitar Hero,'” said Spencer. “When I was little, while everyone was outside playing, I was grinding, trying to improve my game. I used to not be able to place my fingers on all of the buttons. But as my fingers got bigger, I could play every button. Now, I just dominate!”

“Madden Mini-Games” are also very popular in the Cellar. These mini-games are intense, some ending in fist fights and profanity-laced tirades about Madden-related glitches and how the computer is cheating. While many claim they are the best, the game player with the username “YungJayBo32” has the highest score on the “Madden Mini-Game.”

Others enjoy using the cellar as a place to compete in matches of Nerf basketball. “[Playing Nerf basketball] is a lot of fun,” said senior Philip Elliott. “One time I dunked on Tim [Coleman] and the whole cellar went crazy.” Others can be seen spending time on couches, talking to one another and playing foosball. Sources say that there could be some new additions to the Senior Cellar, including La-Z-Boy couches, an ice hockey table, and even Vegas-style slot machines (pending Mr. Gannon’s approval).

Ultimately, the Class of 2016 is enjoying their short time in the cellar. “It is a really fun place to make memories,” said senior Peyton Attridge, with a sheepish grin on his face. “I hope we will enjoy the rest of our time here in the cellar.”