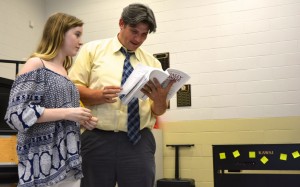 Mr. Bryan enjoys teaching an elective acting class as well, because it adds to the students’ overall knowledge of theatre. Here, he works with junior Willie Lieberman. Photo: Libby Sams

“I love watching an ensemble or production succeed,” said Mr. Sean Bryan. “I love watching the actors and the crew get all the glory that they get. That gives me great satisfaction as a director.”

Though the Pace community wistfully said goodbye to Dr. George “Doc” Mengert last spring, the Pace family has opened up their arms to Mr. Bryan as the new upper school visual and performing arts teacher. Most commonly recognized as the new drama director to theatre kids, Mr. Bryan has already jump-started his Pace career with the selection of “Legally Blonde” for this year’s Fall Musical. His last job was performing arts department chair and drama teacher at the Ransom Everglades School in Miami. Prior to working in Miami, Mr. Bryan earned his Bachelor of Fine Arts in theatre from the University of Kentucky and a Master of Fine Arts in theatre at the University of Iowa.

Mr. Bryan’s ambitious plans for this year are already in motion with his new acting class elective and senior-directed showcase for this winter. In order to learn how to succeed, Mr. Bryan believes a great approach to high school drama is creating as many opportunities to act, write and direct as possible. “I believe that high school is a place for you to test the waters and learn how to direct,” said Mr. Bryan. “I’d rather you do it here rather than in the future where the stakes might be a lot higher.”

In addition to being a successful actor, director and teacher, Mr. Bryan along with his wife Genevieve have two children, Henry and Lucy, who are currently enrolled in Pace’s Lower School. As a classic theatre enthusiast, Mr. Bryan refuses to give a direct answer to what his favorite show is, but names a few of his favorites, which include “Once,” “Cabaret,” “Lend Me a Tenor,” “Death of a Salesman” and “The Glass Menagerie.” He never can pick a favorite show, saying that “each show contains a lesson, and there are so many important lessons to learn that I just can’t pick one.”

Mr. Bryan had always gravitated towards theatre, and one day he gleefully realized he could make an occupation out of it. “I love being in the dark shadows in the back, watching everyone get their shining moment because that’s what it’s about,” he said. “It’s about me helping you build the ship so that you can sail it.”