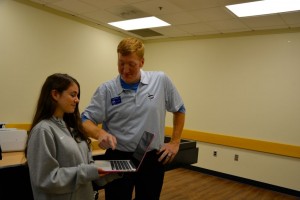 As every new school year at Pace commences, there are always new faces to meet. This year, one of these includes Pace’s newest computer specialist, Kevin Neely. Born and raised in New York, Mr. Neeley attended the State University of New York at Fredonia as a sociology major, before going on to receive a Master of Science in sociology from the University of Texas at Arlington. Mr. Neely worked as a quality assurance engineer and provided inside channel support for Promethean, Inc. before coming to Pace. But there is much more to him than meets the eye.

“I first jumped into a mascot suit in high school [Roy C. Ketcham HS in Wappinger Falls, New York] when the guy who was our mascot, as well as a friend of mine, could not make it to the football game and asked if I wanted to fill in,” said Mr. Neely. “We were the Ketcham Indians. I spent the game walking among the fans, kids, cheerleaders and team just giving high-fives.”

Mr. Neely began spending his free time as the mascot, but it didn’t stop there. He won a radio competition for a chance to audition his senior year to be the mascot for the new Single A baseball team, the Hudson Valley Renegades, in his town. As caller number seven, Mr. Neely met the team management, tried on the suit for Rookie the Raccoon, and got ready to give it his best shot. “The auditions consisted of all the people who also called in to show up to a local comedy club,” said Mr. Neely. “We each had three minutes to play a song of our choice and do whatever we wanted to do. Whomever the crowd liked best won the job.” Mr. Neely said that he won it by dancing to James Brown’s “I Feel Good” complete with the “jump, landing in a split and sliding up to my feet move. “It brought the house down!”

After smoking the competition, Mr. Neely spent the next five summers running around the stands, concourses and base paths of the Renegade stadium, goofing on the parents and signing autographs for children. He even made personal appearances, where he attended parades, festivals, openings and other events for townships and businesses around the Hudson Valley.

“Watching sports is an exciting and wonderful experience for the whole family,” said Mr. Neely. “But there is inherently a separation between the fan or spectator in the stands and the student athletes on the field or court. The mascot can move between the field and the stands and act as the facilitator of that excitement, or at least the embodiment of the spirit of the game.”

Fortunately for Pace Academy, Mr. Neely decided not to leave his mascot legacy in his past. Now, he feels as though he has an obligation to mentor the Academy’s mascot proteges and help Sir Wins-a-lot become the best that he can be. He described his long-term ambitions as, “getting more students involved and willing to jump into the suit and help be the Spirit of Pace Academy.” Mr. Neely plans to develop entertaining skits for the knight mascot during timeouts and halftime to engage the audience directly during the game and make the whole experience that much better. 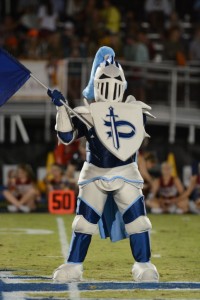 With this year’s football season getting lots of notice, Sir Wins-a-lot also seems to be off to an auspicious start. One can find Mr. Neely on the first floor in the IT office during the day, and maybe even in the suit from time to time. For certain, this year’s IT department addition has proven himself already to bleed blue and white.