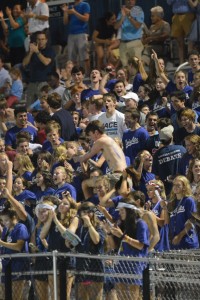 The KOTRT celebrate a Pace touchdown against the Lovett Lions.
Credit: Fred Assaf

As the sun sets and players hear final words of encouragement from their coaches, the Walsh Field bleachers slowly fill up with students eager for another win for the PAK (Pace Academy Knights). With an increasing number of wins in football, cross country, basketball, soccer and tennis (just to name a few), students are flocking to the stands. This boost in school spirit called for a renewal of the Pace student-fan organization, otherwise known as The Knights of the Round Table (KOTRT), founded by Miles Sheft ’13 his senior year.

Whether the students are clad in white, neon or camouflage, senior and club leader Bailey O’Sullivan is always the voice heard at the front of the Knights student section. “Our goal is to help the squad bring home the W,” said Bailey. “We know our rowdiness brings a hostile environment for the other team.” Joining Bailey at the head of the KOTRT are fellow seniors Jack Dwyer, Spencer Hemmingway and Anthony Trinh, who will lead the organization throughout the year, spanning all athletic seasons.

After the buzzer sounds and the fans slowly trickle out of the stadium, many leave with headaches, sore throats and sweaty bodies. “If you compare me to any other fans, I am the most winded fan out there,” said Bailey. While some fans may think that dedicating their nights to yelling wildly and losing their voices isn’t worthwhile, the athletes really do appreciate every chant. “While I stand on the sidelines waiting to finally get in, I’m always hype, because of the constant noise coming from the stands,” said sophomore running back Gavin Guest. The athletes plead for their fellow students to support, because a rowdy atmosphere can give the home team a major advantage.

Whether or not the PAK is the greatest student section is up for debate; however, the leaders of The Knights of the Round Table are confident in their success and noise of the student section. “We are by far the best student section in the state,” said Bailey. “Just look at the success of our teams, and that does the talking.”