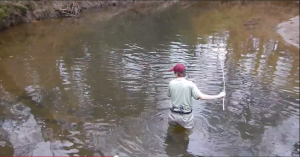 Ever since he was young, sophomore Ben Thompson’s favorite hobby has been fishing. Photo: Alexander Holmann

Students were overwhelmed and feeling claustrophobic as they circled the Inman Center on that Tuesday morning of Sept. 8. The commotion and excitement was not only complete chaos, but typical of the annual Club Fair. This year, Student Council has approved 40 clubs, 18 of which are new. They include Jewish Student Union, Adopt a Golden,  Fishing Club and Mango Languages Club.

Hoping to show another side of the Jewish religion, sophomores Hanna Greenberg and Sloan Wyatt have chosen to start the Jewish Student Union (JSU) club. Their mission is to help teens find a sense of community through hands-on activities that focus on Jewish values. “Anyone can join, even non-Jewish people who are curious to learn more about Jewish traditions,” said Hanna.

JSU is a nationwide organization whose primary goals are to expand the knowledge of Judaism and reconnect teens with their Jewish roots. Their focus for the year is to reach out to underclassmen interested in connecting with fellow classmates regardless of religion. Hanna wants people to know that “it is not only about the free food, but also the interactive projects that establish a sense of community among the students.” Skiing trips, menorah building and other fun activities are planned for this year.

Senior Claire Di Meglio is raising awareness for the Adopt A Golden Service Club. As the only leader of the club, her goal is to “get it started and running efficiently.” She wants the club to have a permanent and lasting impact on our school. The club will work on fundraising while finding loving, permanent homes for Golden Retrievers. Their overall mission is to decrease the number of stray dogs living on the streets. Claire loves all animals, especially dogs, and she felt that starting this club was “a good opportunity and a great fit for her to help in the community some way.”

Looking to spend more time outdoors, sophomores Ben Thompson and Alexander Holmann thought it would be a great idea to create a fishing club. They want to “spread the sport of fishing further into the Pace community,” says Ben. Fishing is very relaxing, so if someone is looking to de-stress, they believe fishing club is a great option. Partnering with faculty member Mr. Whyte, the sophomores plan to spend their weekends at various lakes and rivers.

Originally, juniors Miles Hsu and Jibril Sadiq wanted to dedicate their club to learning the language and culture of Japan. But they wanted to expand the club to more languages such as Arabic that are not taught at Pace. Students joining their newly formed Mango Languages Club will learn about an entire culture, including language and foods. Dr. Ball is their faculty sponsor because “he is the guru of Mango,” said Miles.