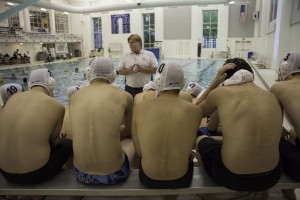 Senior Brad Rubin receives the ball and makes his way towards the net. He takes one last look at the open water before him and fires away. This is the Pace Academy water polo team, a group of water-starved maniacs who spend countless hours in the Pace Natatorium. The group, headed by Coach John Ague, is attempting to complete the impossible. “Although many people do not even know what water polo is, we have a chance to make history,” said sophomore Avery Herman. “The group has progressed so much, and we really are trying to put Pace Academy water polo on the map.”

The water polo team was faced with serious challenges at the beginning of the season. Losing six critical seniors who graduated in May, the squad was lacking the pivotal leadership that had helped establish the program. In addition to these struggles, Coach Ague made the bold decision to reclassify divisions, moving up to the highest tier of Atlanta metro area water polo.

“We had a record breaking year last year and we knew it would be hard to replace those seniors; however, the team has done a great job stepping up and filling the gaps,” said Coach Ague. “Moving up divisions has forced us to play the best opposition, and I am very proud of the team’s development and effort so far.” In the face of new challenges, the Pace team has excelled.

Nearing the end of the season, the water polo team has a record of 5-8, including many close losses and valiant wins. At the beginning of the season, the Pace Aqua Knights battled the second place team in the state to a nail biter, barely losing in the last minutes 8-9. Although they have few games left, the Knights have drawn confidence from that effort. Featuring perennial stars in seniors Brendon Pace, Brad Rubin, Joe Loughran and Ciara Sadaka, the team has proven that they can compete against the best competition. “The rest of the season definitely should be interesting as we prepare for State,” said junior Caleb Levin. “Many people at the beginning of the season wrote us off, but now we have shown we can play against anybody.”