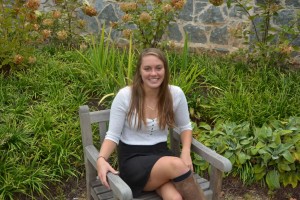 Junior Jessica Haidet has excelled as both a soccer player and student. Photo: Dori Greenberg

KN: When did you start playing soccer?

JH: I first started playing at Tophat when I was four.

KN: Was there someone who inspired you or got you involved in the sport?

JH: I think my dad was the first person who motivated me to play. He was also my coach.

KN: Is there one coach over the years who has really stood out to you or been a mentor that you’ve become close with?

JH: Probably my current coach Troy, he has coached me for about four years. I’ve become my best with him as my coach. He’s really helped me grow as a player.

KN: What is your future plan for soccer?

JH: I haven’t really decided for sure yet. If I have an opportunity I’ll probably think about [pursuing] it, especially going internationally would be something fun for a few years after college, but I’m not really sure yet.

KN: Why did you choose to play at USC (Southern California) beyond Pace?

JH: I fell in love with California when I was eight and so I just knew I wanted to go to one of the many schools out there. Then after all of the ones I looked at, it was one of my favorites because they have a big focus on football and athletics and they’re the most similar to an SEC school.

KN: If you were given another offer from somebody at this point would you take it, or are you set on USC?

JH: I think at this point there is not another school I can see myself at, regardless of another offer.

KN: What do you feel your role is on the Pace soccer team?

JH: I don’t set the best example for people on the team behavior-wise, because Ron makes me run a lot. But, I think just to show that hard work at practice and outside of just Pace practice, we can all be really good and our team could really succeed.

KN: How was the state championship experience?

JH: It’s one of the best things I’ve ever done. I think it’s one of the only things that’s ever brought me to tears. I was so happy and into it. I also got to share it with everyone on the team who I was so close with, and my sister was in her last year of high school, so it was really amazing.

KN: The team frequently looks to you for help, and your injury last year was definitely a setback that the entire team felt. How did you feel in that situation?

JH: It was frustrating because I wanted to help our team out and we had a lot of big losses last season, but I was honestly just looking forward to getting better and playing the next season. I think we’re all really excited to see what the season is going to be like.

KN: What are your hopes and expectations for the upcoming season?

JH: I think we can realistically win state again with all the new people we are going to get and who we have already.

KN: When did you start at Pace?

JH: I came in third grade.

KN: Now that you have an offer and are essentially into college, how do you feel? Do you have ‘senioritis’ as a junior?

JH: I think it is sometimes easy to feel like I’m already done and it’s already over and everything, but I do still have to maintain a certain GPA and get certain test scores, so I know that I can’t have senioritis right now and that I need to keep doing well in school.

KN: How do you juggle such a tough schedule and so much soccer? Do you have any free time?

JH: I do have more free time than I ever feel like I do. I spend a lot of time procrastinating and stuff; it’s sometimes tough just because I have practice pretty much every day and games pretty much every weekend, especially during the fall. But I just use my free periods well and do my homework when I can, and it works out.

KN: When you have free time, how do you spend it?

JH: Besides playing soccer, I usually just hang out with my friends.

KN: If you could only eat one food for the rest of your life what would it be?

KN: Do you have a guilty pleasure?

JH: Foodwise, definitely chocolate. If I have one bite of chocolate, I could have a pound of chocolate, otherwise I don’t know. I’m always watching movies. That’s how I procrastinate and spend most of my time. Like, I will be on Netflix all day instead of doing my homework.

KN: If you were stranded on a desert island and you could only bring one teacher with you, who would it be?

JH: Geez, probably Mr. Whyte because he’s very outdoorsy and granola, so he could probably help us survive.

KN: What’s your most embarrassing moment?

JH: One time we had soccer practice in Inman, so we were playing indoor and I was like going hard and fell in front of everyone who was in there. It was really embarrassing. It’s like the worst thing that’s ever happened to me.

KN: What’s something that very few people know about you?

JH: I don’t think many people know that me and my sister have two horses that live like two hours away. We never see them, but yeah.