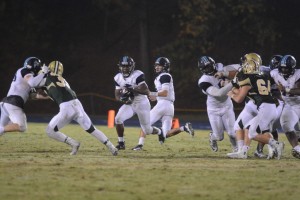 In a hyped-up matchup between two Region 6AA powers, Pace Academy (6-1, 2-1) came out on the short end of the straw, falling to  Wesleyan (5-0, 2-0) 18-9 Friday night in Norcross. While the Knights defense lived up to its billing, holding the usually proficient Wesleyan offense to only 12 points (with the other 6 coming on a pick-6), the Wesleyan defense stood out. The unit only allowed 9 Pace points as the offense failed to resemble the Pace team that put up 26 on Holy Innocents’ the week before.

Pace got the scoring started with a 32-yard field goal by senior Samuel Sloman, but Wesleyan quickly answered, with RB Jordan Argilagos bursting up the middle for a gain of 66 yards to put the Wolves on the Pace 1 yard line. QB Banks Ramsey dove in for the score on the following play, the first of his two rushing touchdowns.

After a Wolves linebacker picked off sophomore QB Gunnor Faulk’s pass and returned it for six, Pace showed its first sign of life with an electric 80-yard touchdown run by junior Deon Jackson. The run was a monumental relief for a rushing attack that had been continually stalled all game. However, Pace failed to get the 2-point conversion attempt to stay down two possessions.

The game ended unceremoniously, as Pace could not threaten on offense and fell by nine. As Wesleyan players and fans celebrated at midfield, Pace players trudged dejectedly to the locker room. Coaches hope the game will restart the energy in this Pace team for their epic clash on Oct. 9 vs. Greater Atlanta Christian. If you can’t make to the game at GAC, make sure to tune in on KnightFlix to see if the Knights can get back on track.

Game Notes: The game, which earlier in the week had been dubbed the Fox High 5 Game of the Week, was covered by a heavy media presence at the rain-lashed Wesleyan field. Right as the Wesleyan kicker was teeing the ball up for the opening kickoff, all of the lights went out in Wesleyan’s stadium, resulting in a 15-minute delay. Traveling support was loud for the Knights, with fans making their presence felt throughout the game.