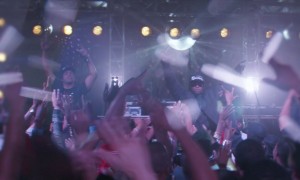 Ice Cube and Eazy-E, two N.W.A. members, pump up a crowd at a performance. Photo: www.straightouttacompton.com

N.W.A. became one of the most influential and controversial rap groups of the past century, going from the streets of Compton, California to the national spotlight with their explicit messages and graphic language. The group, which included rappers Eazy-E, Ice Cube, and MC Ren and producers Dr. Dre and DJ Yella, took the nation by storm in the late 1980s by sharing their stories about Compton to the public.

Their music addressed the issues they faced at home of gang violence, drug trafficking, and worst of all, police brutality. Although gangster music was their claim to fame, that was only one dimension of the group, as the movie “Straight Outta Compton” chronicles. Broken relationships, conflicts over money, and untimely deaths bring the movie in many directions besides music, creating a diverse and multi-faceted plot that plays to a mix of emotions.

In the beginning, the movie gives viewers a glimpse of the lives of each member of the group. Eazy-E, at the time a drug-dealer, looks for a new direction in his life. Ice Cube is a high school kid with big dreams of a rap career. Dre and DJ Yella work at a nightclub together. After Ice Cube and Dr. Dre get Eazy-E to fund their new rap label, Eazy jumps into the recording booth and unwittingly records a breakout hit: “Boyz-n-the-Hood.”

From there, the group gains clout with the help of Jerry Heller (played by Paul Giamatti) and takes off, going on a national tour and partying excessively. In addition, they have skirmishes with the police due to their music, which according to the FBI encouraged violence and resistance towards police. The music was a reflection of their lives in Compton, however, where racial profiling and excessive force by police were common.

The film grabbed viewers with its facets such as tarnished relationships, usually due to money. Soon after their breakout as N.W.A., Ice Cube develops jealousy towards Eazy, who garnered most of the money and fame. Cube breaks off to do his solo act while releasing diss tracks about his former friends. Later, Dr. Dre leaves and joins Suge Knight, a rap entrepreneur, to form Death Row Records. Dr. Dre and Ice Cube gain their own respective success while Eazy struggles, creating resentment between the three.

The movie also becomes a tear-jerker, providing a stark contrast to the rough and tough Compton attitude much of the movie portrays. In one scene, the group huddles around a distraught Dr. Dre, consoling him as he tells the story of his younger brother’s death. However, the most emotional part of the movie belongs to Eazy-E. He contracts HIV, and his deathbed scenes along with the other characters’ conversations with him were both moving and heartbreaking. It brought an emotionally powerful aspect to an exceptional plot and transforms “Straight Outta Compton” from an action-packed biography into a deep, multidimensional film.