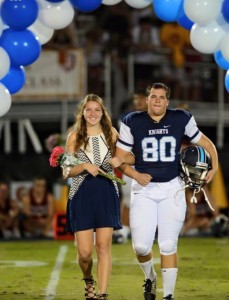 Fans cheer as nine pairs of students stroll across Walsh field and under an arch of blue and white balloons. The students were chosen by their peers to represent each class during the homecoming game against Holy Innocents’ last Friday and during the homecoming dance this Saturday night. Although the title is coveted by many, controversy surrounded this years’ homecoming court.

The homecoming game, where members of the homecoming court are expected to walk across the field during half time, was scheduled during Music Midtown. This caused anxiety throughout the high school as many had already paid hundreds of dollars for tickets to the annual music festival.

Sophomore Charlie Stonecipher and junior Rob Warren, both elected to homecoming court, desperately sought to remedy this situation as both wanted to go Music Midtown. Charlie and Rob managed to get friends to walk for them during the game so that they could go to the festival while remaining on the court. “I am happy we could resolve this situation,” said Charlie, “and I am honored to have been selected by my grade to be on homecoming court.”

From the six seniors selected to be on homecoming court, one boy and one girl are chosen to be homecoming king and queen. Tensions are running high as the announcement of king and queen draws near. “I would like to win because I think I would be a great king,” said senior Samuel Sloman. “But I just hope that after the vote there will not be any grudges.”

Past homecoming kings and queens include Elijah Holifield and Larine Hamied, Class of 2015, and Kenny Selmon and Katherine Merritt, Class of 2014. “Although being homecoming queen is arguably the most important accomplishment of my life, I’m ready to pass down the title to my protege,” said Larine.

Possibly the most anticipated event regarding homecoming court is the student written descriptions of each of the members. In the middle of the homecoming dance, students file into the FAC to listen to a description of each member of the court before the king and queen are crowned. “I am quite worried about what my peers wrote for my description” said sophomore David Roos. “Hopefully they will take it easy on me, and I hope everyone will come to the dance.”