Colorful characters marched through the streets of downtown Atlanta over Labor Day weekend while  spectators roared their support. Propaganda filled every open space and store. But this was not a nerd uprising, this was DragonCon (although there’s only a slight difference). Wave after wave of representations of different fanfictions, video games, organizations, TV shows and movies flowed through the streets. People climbed to higher ground and strained to see displays of love for their obsessions.

After an hour of the parade, the fans migrated home or obtained their  convention passes in a long line. The wait was not long because the system was organized and efficient. Soon, every Chewbacca, Captain Kirk and Lord Stark were free to take to the streets.

An official DragonCon website provided information on everything from service projects to celebrity appearances. Many of the participants had the DragonCon app which alerted them to upcoming events and their locations. One popular location was the shopping building where multiple floors held fan merchandise from T-shirts to real swords.

Other events featured informative sessions about popular shows, movies, video games, etc. such as “The Science Behind ‘Game of Thrones.'” Participants could be seen laughing, smiling and cheering, which created a joyful atmosphere. “DragonCon is a really fun experience,” said sophomore Jennifer Spalten. “It’s really great to hang with friends there.” 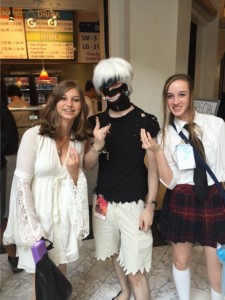