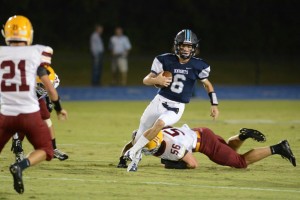 Sophomore QB Gunnor Faulk uses his mobility to gash the Golden Bears for a big gain on the ground. Photo: Fred Assaf

For the second straight game, Pace started off slow against an inferior opponent, leading the rival Golden Bears of Holy Innocents’ 9-0 at halftime. However, unlike last week’s nail-biter vs. White County, the Knights pulled away from HI in the second half to a dominating 26-0 win at Walsh Field.

The rushing attack and a stifling defense were the keys for Pace, as the team rushed 32 times for a total of 295 yards and two touchdowns. In the midst of some uncertainty regarding the ground game with junior Jordan Payne and sophomore Realus George both out, junior Deon Jackson stepped up in a big way with 162 rushing yards on 17 carries, including one dazzling 48-yard TD scamper. Freshman Keashawn Perryman also filled in as a change of pace back, with 58 yards on 12 carries.

Both teams were sluggish on offense early, leading to a scoreless first quarter. Pace came out firing in the second quarter, taking a 9-0 lead on a Samuel Sloman field goal and a 22-yard touchdown sprint by sophomore QB Gunnor Faulk on a broken play. The Knights didn’t step off the gas in the second half, continuing to build their lead with the help of a lights-out defense. The disparity in talent level between the two schools was apparent. Even with Pace not playing to their full capability, there was still a feeling that Pace would win the game no matter what.

The game was homecoming for the Knights, as former alumni came back from around the country to watch the game. The homecoming court was presented at halftime in the usual tradition and splendor. Despite the annual Music Midtown festival taking place at Piedmont Park, the student section still showed out well for the big rivalry game between the two Region 6AA schools. The rivalry, which is the most heated in basketball, still produced a couple of fiery moments on the gridiron. In the third quarter, a Holy Innocents’ player was ejected for shoving a Pace player after the play was over. Nevertheless, the Knights kept their cool and let their play on the field do the talking.

After an undefeated start to the season, Pace (5-0) travels to Wesleyan next week for a monumental Region 6AA showdown vs. the undefeated Wolves (4-0). If you can’t make it out to Norcross, make sure to tune in to KnightFlix for this huge clash. https://www.youtube.com/user/paceknightlynews