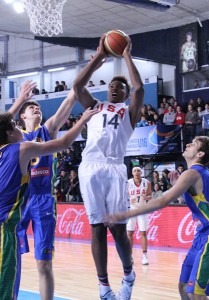 By this time, Wendell Carter Jr. has become a well-known name around the Pace campus and around the United States. However, the #2 player in the nation doesn’t maintain such a high national ranking by only playing five months of the year for the Knights. This past summer, Carter Jr. achieved success on two different teams: AAU Georgia Stars U17 team and Team USA’s U16 team.

Wendell played up a year, as he competed with mostly people graduating with the Class of 2016. For the Georgia Stars, he was the only rising junior on a team with national college recruits such as Auburn-commit Jared Harper, Florida State-commit Trent Forrest and 5-star center Udoka Azubuike. During the regular season, the Stars went 14-3 with Wendell averaging 11.4 points per game, 8.1 rebounds per game (leading the team), and 1.2 blocks per game.

The Stars were able to ride Wendell’s strong play to a national championship appearance at the Peach Jam Tournament here in Atlanta, facing the #2 player in the Class of 2016 and Duke-commit Jayson Tatum, playing for the St. Louis Eagles. After posting a season-high 25 points, along with 13 rebounds and 8 blocks, Carter Jr. was named Co-MVP of the tournament along with Jared Harper, who scored 36 points in the final. Wendell was also selected to the Elite Youth Basketball League (EYBL) All-Star Team that played in the Bahamas, which he said was his favorite tournament of the summer.

Wendell also spent time traveling the world with the USA U16 Team, competing in an international FIBA Americas tournament in Bahía Blanca, Argentina. In the tournament, Wendell’s team went 5-0 and Wendell started in every game, averaging 13.1 PPG and again led his team in rebounding with 8.8 RPG. After winning the first four games by double digits, Team USA met Canada in the championship. Wendell had 11 points and 10 rebounds to help lead the red, white and blue to a 77-60 win, earning Team USA U16 a gold medal at the FIBA Americas tournament and giving them an automatic bid for next year’s FIBA World Tournament.

Also on the team is the Class of 2017’s 9th-ranked player in the country and personal friend of Wendell, Gary Trent Jr. from Apple Valley, Minnesota. Many rumors have surfaced of the two possibly pairing up to play together in college. When asked about the rumors, Carter Jr. responded: “It’s just something that we talk about every now and then, but it’s nothing official.” For everyone interested in Wendell’s college thoughts for right now, he says, “My options are still open at the moment.”

As for this upcoming Pace season as a junior, Wendell says that he and the team have one goal that stands above the rest: “[We] are looking to win state by any means necessary.” Coach Smith agrees, but added: “My focus for our team is for each and every player to get better every day as a person and player individually every workout, in the weight room, in every drill in practice, in every game, and in the classroom.”