Varsity Volleyball Aims to Spike Their Way Back to the Top 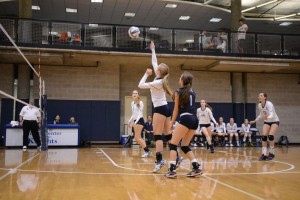 With a slew of regional games ahead, the varsity Lady Knights are facing a challenging season. Last year a successful run in Savannah, resulting in an Elite Eight appearance, placed varsity volleyball at Pace’s center of attention. The thrilling playoff finish built up quite the anticipation for this season.

After saying goodbye to six players, the Lady Knights have lost some experience. Nevertheless, Coach Anna Bush is determined that her team will once again spike their way to the top. “We’ve been competitive in all of the matches, but our win/loss record is not going to reflect the optimism that we see going into the middle of the season,” said Coach Bush.

But as the season progresses both the players and coach know that this year’s schedule guarantees no easy wins. In comparison to last year, the varsity team is redeveloping the foundation of their roster with two new freshmen and three dedicated sophomores.

While the team is certainly capable, the lack of experience poses an inevitable problem in regards to communication. When questioned about the team’s greatest weakness, the girls agreed that their connection is lacking. Sophomore Nia Brown also commented on the challenges of the team’s back row [in comparison to last year’s team], and the need for more passers, which is a vital element of the game.

The team is predominantly composed of solid hitters, setters and an exceptional “block in the middle” because of the team’s overall height. The roster includes standout starters such as Summer, who has already committed to Duke. Alongside Nia, the sisters combine to make an unstoppable pair. Audiences are awed by their dynamic chemistry, and coaches are pleased with their competitive sibling rivalry and dedication to the game. But the Brown sisters are merely the tip of the iceberg when it comes to talent, as freshman Alexandra Baker has it in spades.

Looking ahead to the remainder of the season, the players assure fans to remain hopeful. “Once everything comes together, we should be able to play with almost any team in the state,” said …