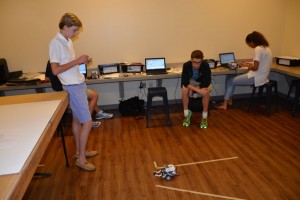 Juniors Alex Kaye and Connor LaMastra focus on the details of their robot in Room 101. Photo: Jordan Harris.

Room 101 in The Arthur M. Blank Family Upper School is  home to a new tenant for the 2015-2016 school year.  Upper school science teacher Brianna Korb now oversees the activity occurring in Pace Academy’s first robotics elective class, an expansion stemming from Pace’s robotics club, the RoboKnights. “The robotics course was started in large part due to the robotics club,” said Mrs. Korb. “We’ve found that students aren’t able to fully participate in the projects after school because there is not enough time.” Because of these time constraints on the club, the administration decided to give students the chance to add robotics as a scheduled elective. So far, six students have joined the class and all seem to have taken a liking to the course and its material.

“I really like the class,” said junior Summer Brown. “My favorite thing about the class is constructing and testing the robots.” The students are instructed to manufacture a mobile robot using the fundamental principles of computer science, analytical mathematics and basic physics. This concept ties into an international high school competition called FIRST Robotics, which the RoboKnights compete in annually. FIRST stands for “For Inspiration and Recognition of Science and Technology.”

Currently, each student is learning the ups and downs that come with working with robotics. “In a way, robotics is similar to physics,” said Mrs. Korb, who holds bachelor’s and master’s degrees in physics. “You have to have the ability to keep trying things. Sometimes you find the correct solution, other times your solution may be wrong. I think it’s critical for students to be able to tinker around with something in order to truly learn.”

The course also provides the opportunity for students to showcase their creativity and passion for the subject. “The class lets them be creative in a more technical aspect,” said Mrs. Korb. “The students, while using the programming, get to show their creativity by adding turns, lights and even sounds while learning angles and rotation.” The students work with tires and motors which help their robot function more effectively.

Senior Parkes Tesler finds peace inside a classroom echoing the sounds of functioning robots. “The work is a lot of fun,” said Parkes. “I’ve been a RoboKnight since the sixth grade and I enjoy the work that comes with the subject.” Parkes sees robotics as definitely playing a role in his future, saying, “I want to major in mechanical engineering in college and this gives me a chance to pursue a passion while providing me necessary experience.”

The members of the elective course will soon shift their focus toward preparing for upcoming competitive events. The RoboKnights are vying for a high ranking in a section of FIRST called First Tech Challenge (FTC). On Sept. 12, the committee for FTC will release the competition details and requirements, both nationally and globally. Once the challenge is released, the Knights will have around six to eight weeks to prepare their competitive bots to meet the established requirements. Members of the RoboKnights hope that the newly allocated space and time designated for the elective class will generate great results for the upcoming competitions this school year.