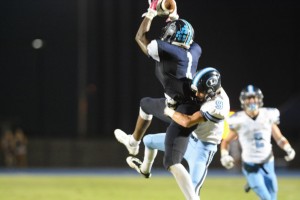 As the 2015 football season gets underway, many Pace fans are hopeful that this will be the best season in the history of our prestigious academy. The season began with Pace ranked 10th in Class AA going into the opening game against rival school Lovett, ranked seventh.

The prediction by the Atlanta Journal and Constitution had Pace as a 29-point underdog. But the Knights banded together and proved to be a force too strong for Lovett to handle, shutting them out 24-0 and sending a wave of optimism flowing through the home crowd at Walsh field.

Although Pace won as a team, a couple of players stood out from the rest. Junior Trey Blount, with offers from Alabama, Georgia, South Carolina and Miami, scored Pace’s first touchdown of the season on a 52-yard punt return. Sophomore Jamaree Salyer, ranked as the #1 offensive guard in the nation for the Class of 2018, also brought his best.

Jordan Payne and Deon Jackson, both juniors, have carried the load in the backfield and done a phenomenal job on the defensive side of the ball. “We’ve done well up to this point, but we have to keep working week by week and game by game,” said sophomore quarterback Gunnor Faulk. The Knights continued their streak by beating Our Lady of Mercy 34-3 and Landmark Christian 38-30. Most recently, Pace knocked off White County on a field goal by Samuel Sloman with 8 seconds remaining to win 16-14.

Leading the team this year are captains Anthony Trinh, Philip Elliot, and Spencer Hemmingway (all seniors). “We think that our team has really come far from fall camp,” said Phil. “We have a lot of improvement to do, but we feel like we have a chance to do something unique this year.” Now ranked #5 in the state in Class AA, the future looks very bright for this squad.