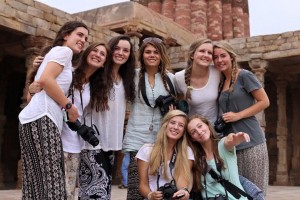 Upperclassmen girls share a smile outside of a fortress in India.
Photo: France Dorman

“The train was definitely a cultural experience,” said junior Sari Leven, reflecting on her India Global Ed trip this past summer. From searching for the elusive Bengal tiger in the Khana Reserve to exploring the ancient, Buddhist temples of Elephanta Island, India was quite the experience for 22 of Pace’s upper school students. There aren’t many other places one can go to find an experience so different from American culture than the other side of the world. Pace students flew into Mumbai and ended in Delhi, stopping at many places on the way, including Jaipur, Agra, and Jodhpur.

The emphasis for the trip was primarily on photography, and the group spent most of their time taking incredible pictures of people, interesting architecture, and other aspects of Indian culture. Most of the photos will be on display in Mr. Dorman’s India exhibit at Pace scheduled for Nov. 2-24.

There are always special highlights of school trips, and this one was no exception. Though the legendary train ride was one of the most frequently talked about events, the students also experienced other tastes of India by cycling through the chaos of busy markets, riding elephants up to the doorstep of a famous palace, and sharpening their bartering skills with the local vendors at every stop. Adventure was around every corner. Girls enjoyed enshrouding themselves in vibrant silks to make saris, while boys easily found the fabled “MC Hammer pants” in all different kinds of designs. Some even learned some Hindi from their guide, Nadeesh, to help break language barriers with local citizens.

Junior Michael Chen reported that his favorite part of the trip was visiting the Taj Mahal. Other crowd pleasers included the Americanized hash browns for breakfast served only at the Crowne Plaza and waking up at 3:00 a.m. for a plane flight. Some students, such as junior Avery Herman, just enjoyed spending their time in the company of their school peers.

“It honestly wasn’t a normal Global Education trip; it was India,” said Mr. DeRosa, one of the chaperones. “To me, the best part of the trip was watching the kids face the challenges of India and overcome them. They all handled them differently than each other and some embraced the culture more than others, but ultimately I was just so impressed with the students.”

Even if it meant getting a little too personal with cheap henna ink, this amazing mix of students came as strangers and left as best friends. Happy to be home, they fondly reminisced about the friends they made, the things they learned and the memories they’ll never forget.