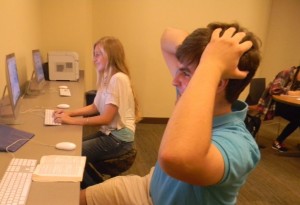 The world of technology is always changing. As soon as you acquire the newest iPhone, Apple announces the release date of an updated model. The same principle applies for something as basic as email. Pace Academy is moving from the outdated FirstClass server in a switch that is expected to bring increased productivity and efficiency for all users at Pace.

The biggest issue Pace students face with the switch to Google Drive is the initial distribution of the accounts. The blank password email that many people received was only one element of the confusion, causing many people to become skeptical if the switch to Google Drive was the right move. However, this was an error from an email blast with a mistake amongst the lists, causing the later portions of the email list to have encountered that error.

The switch to Google Drive is a two year process, with the first year including unlimited data storage capabilities and the added security measures that come with using Google. The server farms for Google have several over three levels of biometric security and scooters to navigate the enormous storage facilities. Also, each hard drive is physically destroyed when no longer in use to prevent any possible breach in security. However, the major reason for the switch is the unlimited data storage for each and every Pace student. The Google Apps for Education also create a more collaborative environment, particularly because of the ability to work on the same document from separate locations at the same time, as many people have experienced themselves through Google Docs. In essence, the decision came down to all of the additional features that Google provides for free, along with the possibility of expanding to email next year.

Although the initial switch to Google Drive might be problematic and take some getting used to, the use of Google Drive will improve efficiency and create a seamless way to access and turn in assignments.