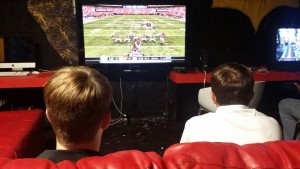 Seniors Bailey O’Sullivan and Jake Richards battle it out in a game of Madden. Photo: Zack Kaminsky

For some people, fantasy football is just a fun game; for others, it’s a lifestyle. Between research, managing the team, watching games, and tons of smack talking, the life of a fantasy owner becomes very occupied. “My preparation time was about 25 hours, and throughout the season I spend about 400 hours on football,” said senior Owen Moncino.

If an owner is lucky, the team’s star will have a breakout year. But if unlucky, prepare to bring in a backup if the star gets hurt or busts. Just ask senior Philip Markwalter, whose first pick last year, Zac Stacy of the St. Louis Rams, had a disappointing performance. “It was the last pick of the first round, so I didn’t know what to expect,” said Phil. “I didn’t do enough research coming into the draft.”

Even worse than a horrible season is something that only the heavens can control: injuries. Sometimes a player is “injury-prone” and a manager can prepare to lose him to an affliction. In other cases, an injury can come out of nowhere and ruin a team. “Usually a losing streak happens because of a string of injuries, and it’s very frustrating,” said Ms. Stevens, a brilliant history teacher by day and avid fantasy player by night.

What makes fantasy football so entertaining? According to sophomore Jamaree Salyer, it is the competition within the leagues, but most importantly, winning. “You really just have to be great,” said Jamaree. “Win and you will have a fun season, but lose, and you may be in for a long, unpleasant ride.”