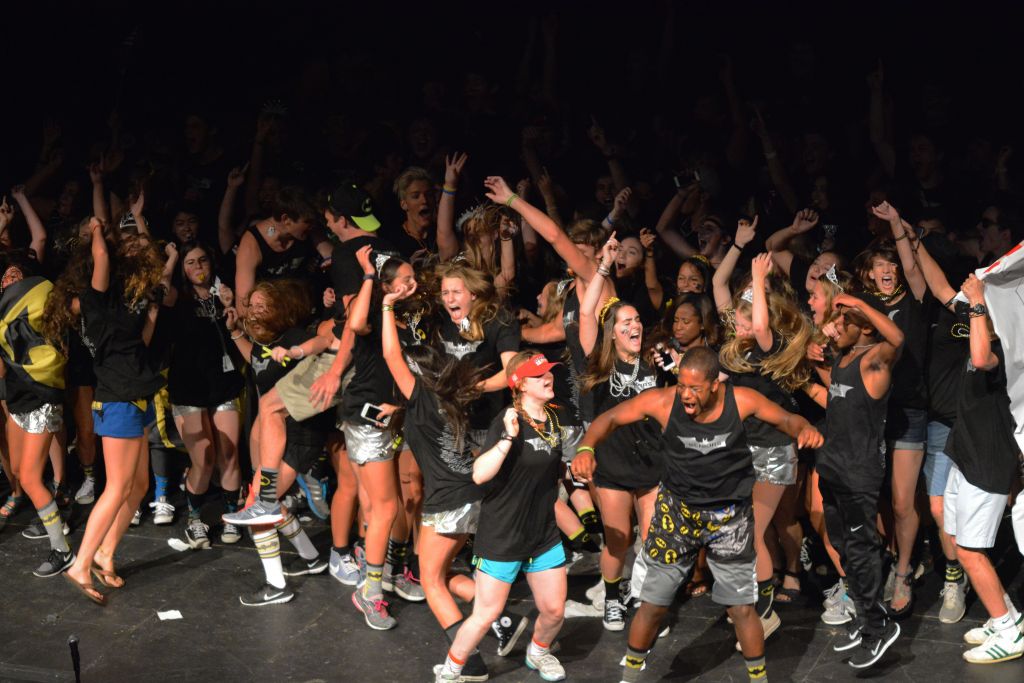 The Class of 2016 celebrates the start of the school year. Photo: Fred Assaf

Droplets of sweat dampen the dark tank top of senior Jean-Luc Brown as he shrieks at the freshmen siblings to pass an orange between their necks. These are the “Dark Knights,” and this orange-passing ritual signaled the start of a new year under the leadership of the Class of 2016. Toilet paper rained over the crowd, as DJ Kyle Duvall serenaded the crowd with his nasty beats of “Black and Yellow.” The juices were flowing on the FAC stage, as a wave of enthusiasm swept over the crowd. “The whole parade was pretty savage, and I felt as if I was floating over my body watching me speak,” said senior and Buckhead Landscaping heir-apparent Bailey O’Sullivan. “I really fed off of the energy of the crowd, and they got me super hyped.”

The Class of 2016 possesses more than just what meets the eye. The seniors, so aptly titled “Fleming’s Angels,” are a melting pot of different personalities, talents, and interests. From Isdell Global Scholars to local service leaders, the Class of 2016 represents Pace on both the local and global scale. Student body president and senior Mark Handler believes that his class will lead Pace into a bright future. “Although our class may have made mistakes in the past, that is not indicative of who we are,” he said. “There is no doubt in my mind that our seniors will fulfill and exceed the expectations as leaders of the school.” With a plethora of Orkin scholars and academic accolades, the Class of 2016 “strives for excellence” in the classroom. For example, Andrew Wu, a member of the Class of 2016, has been in the process of writing a non-fiction collegiate level book titled “Space, Time, and the Universe: A Comprehensive Guide to the Finer Points of Astronomy and Astrophysics.”

The new seniors, however, are not solely academically oriented, with successes on the stage, the field, and in the community. Seniors such as Tory Dancu and Ryan Duvall have grown up in the fine arts program, and these seasoned vets are poised to assume leadership. Meanwhile, the Class of 2016 has already shown extraordinary promise as leaders in athletics. Led by senior captains Philip Elliot, Spencer Hemmingway and Anthony Trinh, the football team manhandled their opponents in the first three games of the season. Beyond the football field, the upcoming year in athletics appears to be promising. In basketball, soccer, lacrosse, golf, tennis and wrestling, the seniors are prime to assume leadership roles. In the community, almost all service projects are headed by seniors. Executive service leaders Mark Handler, Ethan Robinson, Julia Stern, and Nicole Shafer have taken over as official heads of all projects.

Although many know the Class of 2016 as a fun-loving and energetic class, their dean, Brooks Fleming, believes the seniors’ true colors will show this upcoming year. “This is a different role than they are used to being in, but they will exceed all expectations,” said Mr. Fleming. “I feel like as a class they have grown and matured in many ways. I have really enjoyed being their dean and I am confident that they will rise to the challenge.”