Chef Mifflin to Enhance Food Options at the Academy 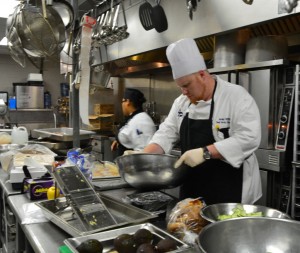 Jeremy Mifflin, Pace’s new head chef, is cooking up ideas to incorporate into the menu that will appeal to every student and faculty member. “I want to start by keeping the menu consistent in order to make everyone comfortable, and then eventually implement a little variety,” he said. With twenty years of experience in food service under his belt, Chef Mifflin seeks to improve the nutritional quality of food at Pace and welcomes meal recommendations. He has a number of new ideas to incorportate into lunch options, saying, “I think bringing back action stations where kitchen staff members are cooking in front of you would be a good addition to lunches. The outdoor patio seems underutilized to me, so adding those stations might be a great opportunity to fill the space.”

Chef Mifflin took an interest in culinary art at an early age thanks to his mother’s influence, and eventually came to enjoy experimenting with his own creations. He graduated with a degree in Culinary Arts from Faulkner State and proceeded to take internships and jobs in multiple hotels and clubs, such as the Perdido Beach Resort, The Capital City Club of Atlanta and Dolce Hotel and Resorts.

Chef Mifflin worked as the Food Service Director at Brandon Hall School for the past four years, so cooking for hundreds of students and faculty members engenders confidence rather than nerves. One of his favorite aspects of Pace so far is being able to provide sports teams with meals. “Knowing that I can give the sports teams nutritional meals before games is reassuring, because I know they are getting an energizing meal, rather than going somewhere like McDonald’s,” he said.

Chef Mifflin admits he has a sweet tooth, which backed his reasoning behind bringing back the soft serve machine full-time. It has proven to be an extremely popular addition to dessert options. He said that he found the machine, a gift from the Class of ‘89, sitting in the basement. Since soft serve at his previous school was highly desired by students, Chef Mifflin said that he wants to “make Pace kids happy too.”

Chef Mifflin enjoys competing in cooking competitions outside of work because they are a way to display his cutting-edge techniques and specialities. So far he has won two bronze medals and one silver, and during his time at Pace, Chef Mifflin says he will “go for gold.”