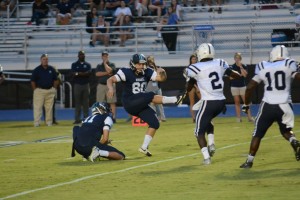 Senior kicker Samuel Sloman nails his first of three field goals on the night to give Pace a 3-0 lead. Photo: Fred Assaf

The game was by far the sloppiest Pace has played all year. White County ran the ball at will and the Knights couldn’t seem to sustain a drive. With the team already dealing with some injuries, a couple more key Pace players exited as the game progressed.

Nevertheless, Pace remained resilient and stepped up when they needed to, mostly thanks to the golden leg of kicker Samuel Sloman. Affectionately dubbed “Ray Allen” by his teammates, the senior nailed a clutch 48-yard field goal with 8 seconds remaining to put the Knights ahead for good. The clincher was the third field goal of the night for the Sloman, including a 53-yarder. The win pushed Pace to 4-0 on the year, while White County dropped to 0-4.

The Knights had a strong start to the game, going into halftime with a 10-0 lead after the Sloman field goal and a 10-yard reception touchdown by sophomore Tony Addison. However, the Warriors from White County came out of the gate strong in the second half, scoring two touchdowns on their first two drives to take a 14-10 lead early in the third.

With offensive forces such as senior tackle Jordan Harris and junior running back Jordan Payne out of the game due to injuries, the Knights were facing an uphill battle to regain the lead. The Knights had the ball at the start of the fourth quarter and quickly threw an interception. The pick was called back, though, due to a blatant roughing-the-passer penalty on White County. The drive resumed, but Pace was eventually stalled at the Warrior 35 yard line. Coach Slade weighed his options before promptly trotting out the field goal unit, and Sloman delivered from 53 yards to reaffirm the coach’s trust in the kicker.

After stopping White County, Pace got the ball back with 5:30 remaining and down by 1 point. Pace moved methodically down the field, relying on a steady diet of runs by sophomore quarterback Gunnor Faulk and freshman running back Keashawn Perryman. Pace got down to the 25 yard line, but a 6 yard loss on a running play put Pace at the 31 yard line. Out came Sloman, and after a couple of quick timeouts, the senior coolly delivered the clinching kick from 48 yards out.

The kick preserved Pace’s undefeated record going into this Friday’s Homecoming matchup against rival Holy Innocents’, which will be broadcast live on KnightFlix at 7:30.

Offensive Player of the Game: QB Gunnor Faulk, who was 9-15 for 83 yards, 1 touchdown passing, 7 carries for 69 yards rushing. Faulk passed for Pace’s only touchdown of the night and engineered the two field goal drives in the fourth quarter. He took several shots but showed great toughness to stay in the game.

Defensive Player of the Game: DB Deon Jackson, with three tackles and two interceptions. The junior was dynamic in stalling the Warrior passing attack with the interceptions.