The Pace boys varsity golf team is a group of lively individuals with high hopes for the season this year. Head coach Bailey Player is described as leading the team with a unique enthusiasm and character that is difficult to find in many golf coaches. Unfortunately, the team dropped their first match against an experienced group of guys from Holy Innocents, but pulled out a statement win against region rivals Wesleyan. “The golfing Knights have been training hard with two goals in mind: winning state and getting our revenge on H.I.,” said junior Jake Richards.

The team did not let this early loss get them down, however. This particular team is tightly knit and has a lot of respect for one another. “[Sophomore] Alex Ross can make all the shots golfers dream of,” said junior captain Kyle Orr. This group isn’t all hugs and high fives, though. They like to poke fun at each other and push one another on and off the course. When asked who brings the most style to their play, Alex mentioned junior Jack Dwyer, who “manages to break at least one club every time he plays.” The team also draws inspiration from professional golfer Bubba Watson, who recently won the Masters tournament twice.

Mr. Player, the distinguished varsity coach who played in both high school and college, says that there are big differences between teaching literary classes and coaching golf. In golf, according to Mr. Player, “there is a right way to swing the club and there are many wrong ways to swing a club… When teaching, though, there are many ‘right’ ways to read a book and very few ‘wrong’ ways to approach a text.” Having said this, Mr. Player enjoys both equally and devotes much time and energy to his players on and off the course. He is known for his stylish and funny golf write-ups which can be found on the Pace website.

Pace boys golf is looking forward to a promising, yet challenging sectional tournament ahead as they continue to improve their game. If they prove victorious in Vidalia (finishing in the top eight), the team will move into the playoffs with the help of their current 4th seed ranking in region AA. 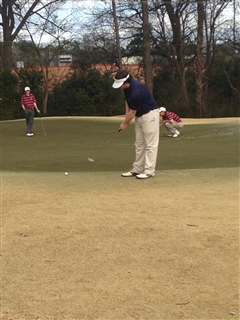