Twin Smokers BBQ Serves It Up Both Ways 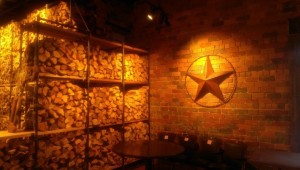 Located in the hopping part of the ATL where the Georgia Dome, World of Coke, and Georgia Aquarium are all within five minutes of each other, Twin Smokers BBQ lies on Marietta Street right next door to Stats. This hidden gem has the perfect location, as fans attending events in Centennial Olympic Park, Phillips Arena or the Georgia Dome have easy access to wonderful BBQ. The name “Twin Smokers” originates from the owners previously having smokers in the restaurant. These two red metal contraptions continue to smoke and cook a variety of meats to perfection.

Twin Smokers elected to send a culinary team across the country, trying all the best BBQ from a multitude of cities. The result of this BBQ tour is a combination of Texas, Carolina, Memphis and Kansas City flavors, melded into one restaurant. Each city is known for its BBQ, but each has its own signature taste. To achieve these distinctive flavors, Twin Smokers uses a variety of rubs and a few different types of wood to get smokey flavors such as Hickory, White Oak, Mesquite and Post Oak.

The decor of the restaurant reminds me of a true farm/ranch experience as the tables are a rustic wood with red checkered tablecloths. The woods used to smoke the meat were stacked along the side wall at the entry. At each table are eight homemade barbecue sauces, each a different flavor that pack quite the flavorful punch. In addition, the hospitality at the restaurant was second to none, as the staff was genuine and attentive.

The menu itself has a solid amount of options, as you can pick between pulled pork, ribs, chicken, sausage or brisket. Each meat can be served two different ways, on a sandwich or straight meat. Most dishes are served with your choice of one or two sides, with options ranging from Southern classics like mac n’ cheese or collard greens and coleslaw.

While I was there, I tried the pulled pork and brisket served with collard greens and chili. The pulled pork was good, but definitely not great. The flavor wasn’t super strong without adding sauce to it, unlike the brisket. The brisket was extremely delicious as you could really taste the smoky flavor. The meat wasn’t fatty at all and the portion size was good for the price you pay. The collard greens were good, but it’s hard to go wrong with this traditional Southern dish. Compared to Fox Bros. BBQ, I’d say that the meat was better at Twin Smokers, but the portions were much larger at Fox Bros., and there were more options. Overall, I’d say that this restaurant is a must try, especially if you are attending an event in the downtown area. It’s a perfect option for a pre-event meal. The BBQ is good, the hospitality is great, and the smells are even better.