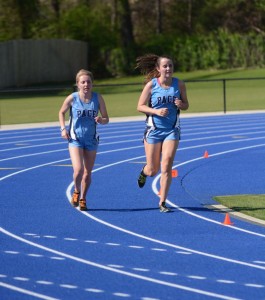 Seniors Katie Nelson and Hannah Kelly race to the finish line in the first ever track meet at Walsh Field. Photo: Fred Assaf

The track: a location of the most exhilarating 15 seconds on the planet where some of the best athletes in the world fight tooth and nail to come out on top in the 100 meter dash. Track athletes spend their whole season preparing for just a few seconds of physical exertion, a single javelin throw or a lone long jump. The seniors this year are leading the squad to what they hope is their best season ever.

The team not only has new members but also new facilities with the new track at Walsh Field. For the first time, with the newly-acquired home field advantage, Pace had the ability to host a track meet which occurred on April 8, giving Pace Academy their first true senior night. In honor of the eight seniors on the team, the Knights had an impressive opening performance. Senior Michael Easley clinched the win with a 21’2″ long jump. With several personal records set and smooth running, the day was one of the most successful in Pace track history.

Eight Pace athletes qualified for the state championship meets. The girls state meet was held May 7-9 in Albany, Georgia. Sophomore Julia Ross placed 5th with a medal in the 800 meters. Senior Lauren Hadley placed 6th on the podium in the 300 hurdle final and placed 7th in the long jump. The 4 X 400 relay of Julia, Lauren, junior Molly Marks and sophomore Sophie Blasberg broke their PR of the season by one second and placed 6th on the medal podium. Freshman Ibum Obum also qualified out of sectionals for state in the shot put with a PR of 31’9″ and continued to throw well at the state meet.

The boys track meet is May 14-16, in Jefferson, Georgia. Senior Michael Easley qualified at regionals to compete in the long jump, while sophomore Max Irvine and freshman Jack Douglass will compete in the 1600 meters and the 3200 meters, respectively.