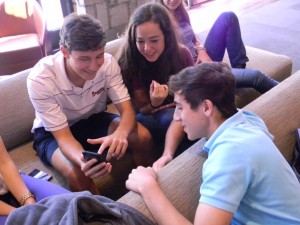 As the freshman class files out of the buses at Camp Skyline in Mentone, Alabama, they officially begin their high school careers. Are they ready? Probably not, which is why they are split into groups and assigned their own counselors for the rest of the year, who are there to lead the best freshman class at Pace – and no, that’s not referring to Transitions. The Peer Leadership program, in which eight pairs of seniors mentor their assigned groups of freshmen every Thursday D period, helps guide the ninth graders through their ominous first year of high school. This coming school year, the groups will be led by some of the most animated students in the senior class.

The eight boys are current juniors Andy Bainton, Jean-Luc Brown, Jack Eichenlaub, Ethan Freishtat, Mark Handler, Sean Murtaugh, Harrison Ray and Ethan Robinson. When asked what he can bring to the table, Ethan Freishtat explained that he thinks his dance moves will thrill the freshmen. “I’ve been told I have one of the best “whip sike” moves in the school,” he said. “The video of it has sort of made me a celebrity around school.”

Each of the boys participates in the Pace athletics program, on the soccer, baseball and lacrosse teams, to name a few. Also, they are all enrolled in rigorous AP courses which will challenge their time management skills. At times their academic lives can be hectic, but they have shown their abilities to achieve success in all aspects of school during their first three years. With this group, the freshmen will have great role models to follow for juggling their busy high school schedules.

The girls include current juniors Lauren Archer, Retta Carolin, Mary Stuart Gray, Haley Hartman, Jillian Paul, Lindsey Sample, Emma St. Amand and Julia Stern. Like the boys, the group is well-rounded and talented inside and outside of the classroom, with each participating in AP classes and sports squads at Pace. As sophomores, Jillian raced on the cross country team and Haley played on the soccer team, both winning their respective GHSA State Championships. In addition, Julia is a service leader, while Mary Stuart and Lauren have taken prominent roles in student government. Lauren might be the most interesting peer leader because of her experience this school year studying abroad in Spain. “I have to be the new kid again this year at school,” she said. “It’ll give me a good point of view for Peer Leadership with the new incoming freshmen.”