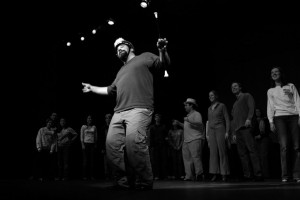 Alumni in 2006 performed Encore to celebrate the 15th anniversary of the FAC. Photo: Caitlin Jones

When Dr. Mengert (“Doc”) announced he was retiring in 2015, Mrs. Caroline Kulinski (Pace Class of 1997 and Doc’s step daughter) decided to reach out to Pace theater alums from all over to plan an “Encore II: Farewell to a Legend” theatrical event. Over fifty alumni, many of whom are now professional actors, singers and dancers, will join Pace students to perform a special farewell to send off the legendary English teacher and director.

“The show will highlight the last decade of Pace musicals as well as look back to some of Doc’s personal favorites from the past 44 years,” said Mrs. Kulinski. Encore II is a follow-up to Encore, which celebrated the 15th anniversary of the Fine Arts Center.

A couple of years ago, Pace waved goodbye to their fine arts department chair and chorus director, Beth Barrow-Titus. Many of the alums are ecstatic to hear that she will be returning to rehearse with them before the performance. The show will open with a number from “Kiss Me Kate,” “Another Op’nin,’ Another Show,” and close with “Les Misérables,'” “Do You Hear the People Sing.” “For me, being with these extraordinary people, and having the honor to rehearse some of the numbers for this fabulous performance, simply feels like being home,” said Ms. Barrow-Titus. “I know this will be an emotional experience for us all.”

Encore II will feature duets by some current Pace students and recent graduates with the original performers, such as “No More” from “Into the Woods” and “Captain Hook’s Waltz” from “Peter Pan.” Also, there will be some ensemble numbers featuring performers from many different years. Sam Downey ’14 is returning to sing a Captain Hook duet with Andre Richard, who played the role of Captain Hook twenty years ago.

Other returning students include Cory Bush ’14, Tucker Weinmann ’07, Tony Papadopoulos ’11, Colin Barham ’12, Caroline Clements Kulinski ’97 and Ben Hirsch ’13. Both alumni and current Pace students will join together to sing the finale, “Do You Hear the People Sing” from “Les Misérables.” “Doc has been a huge influence on my life, and I am tremendously pleased to come back and perform on the Pace stage one last time to honor him,” said  Sam.

Encore II will open Saturday, May 23 at 7 p.m. A cocktail reception will take place in the Gardens at 6 p.m. Tickets went on sale on May 2. They can be purchased online at this link. Ticket prices start at $10.00.