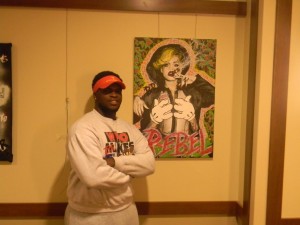 Thanks in part to his artistic prowess, senior Braylin Robinson has become a prominent figure within the Pace community. Here, he stands with one of his portraits, which he named “Rude Boy.” Photo: Jordan Harris.

Flashback to an elementary school in 2000 or 2001. The teacher, Ms. Angelo, calls upon her class of thirty first-graders to draw a picture of their favorite animal. About 20 minutes pass and the majority of the students finish their assignment. As the teacher reviews the pictures, she comes across one that clearly depicts a dragon with great illustration and detail. She commends the young student for his exceptional work that proves impressive for a six-year-old. At this point, the little boy realizes that a door has opened to room full of pastels, paintbrushes, and paper and pencils. On this day, an artist was born; his name is Braylin Robinson.

“Art makes me feel good inside,” said Braylin. “It makes me feel special knowing that I have a talent in something that not everyone is capable of.” Art is Braylin’s gateway to intellectual expression. Like many renowned artists, his thoughts and feelings are aspects that he transfers to a surface. However, one concept stands tall that separates Michelangelo from the Average Joe: the great artists are not only able to transfer their thoughts and emotions to a surface, but they are also capable of presenting their work in a way that is decipherable to people. “I love being able to shift what I’m thinking to a canvas,” said Braylin.

After realizing his talent, Braylin has been in search of a style that accentuates his abilities and garners the attention of the public. “I’m not sure what my purpose is,” he said. “Most great artists have their own developed style and I’m still trying to develop mine.” Although Braylin is at a crossroads with the initiation of his art career, he has still produced some phenomenal work that has caught the eyes of many in the Pace community. One person who has been impressed with Braylin’s dedication is upper school art teacher Donice Bloodworth. “Braylin probably works at his craft harder than anyone else at Pace,” said Mr. Bloodworth. “Since football season ended, he has spent many long afternoons in here perfecting his work. It’s been really cool to see.”

Those same pieces of work are reflections of Braylin’s current approach to his art. My ideas are inspired by other street artists,” he said. “The message is intended to be positive and to promote knowledge and peace.” Braylin has already begun profiting from his art. Recently, he sold a painting called “Rude Boy” for an undisclosed amount. “He’s very talented and has a lot of potential,” said Mr. Bloodworth. “I think he definitely has a career in art.” Braylin’s art can be seen on the second floor of the Arthur M. Blank Family Upper School outside the entrance to the Woodruff Library.