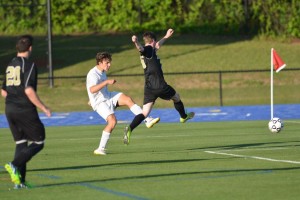 The day started off with a cookout and water balloon fights for the Pace boys soccer players, and ended with a dazzling offensive display that led to a berth in the Sweet 16. The #2 team in Region 6AA, the Knights pushed the tempo early and often vs. the Temple Tigers, the Region 5AA #3 team. While the Knights were unable to break through a stingy Temple defense in the opening minutes despite plenty of chances, the floodgates opened after the 10-minute mark, starting with junior Ethan Robinson pouncing on a deflection in the Tigers’ box to put Pace ahead. Junior Johnny Reece and sophomore defender Sammy Lettes scored soon after to give the Knights a 3-0 lead. A cracker of a free kick from sophomore Tom Phillips into the upper corner of the Temple goal effectively closed the door on any comeback opportunities for the Tigers, and sophomore Chris Howard’s bullet only added to the score line, making it a 5-0 Pace lead at halftime.

The Knights could smell blood in the water, though, and since games are called when a team achieves a 10-goal lead in GHSA soccer, Pace proceeded to score 5 more goals in less than 17 minutes to close out the game and send the fans home early.

The Knights truly put on a dazzling display both offensively and defensively, as the attackers and midfielders created more chances than could be counted, while the defense rarely had to retreat into their own half, given the lack of offensive initiative from Temple. Freshman goalkeeper Jonathan Rushton almost looked bored at some points, as he did not touch the ball but twice the entire game. Johnny was perhaps the most active Pace player, as he displayed his dominance in the midfield, playing an integral role in every Pace attacking foray. Ethan and fellow junior Hobie Malik almost never left the Temple box, while Tom was a constant threat down the left side to cross or shoot.

The Knights will take on Putnam County next week in the Sweet 16 as they continue their march in the GHSA State Soccer tournament. For coverage on all of Pace’s spring sports teams in the playoffs, follow us on Twitter @knightly_news or Facebook, and check us out online at www.knightlife.paceacademy.org/knightlynews.