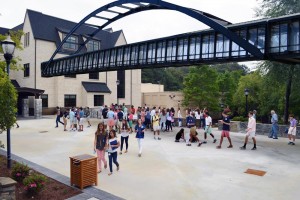 The Dr. George Mengert Memorial Bridge will be the new highlight of the Pace campus.
Photo: Dean Papastrat

After a building spree that added two major complexes to campus, Pace Academy administrators have decided to embark on their next major construction project: the Dr. George Mengert Bridge, which will connect the Arthur M. Blank Family Upper School and the Inman Center. The air-conditioned bridge will span from the third floor of the Upper School to the cafeteria entrance, featuring five state-of-the-art multimedia projectors which will display a rotation of student artwork, a speaker and subwoofer network for students to dance to while walking, and a moving sidewalk to enable swift travel between the buildings.

Mr. Assaf said that he believes “the Dr. George Mengert Bridge will be a new transportation and social hub for students and establish a new level of unity within our campus.” Despite some concerns about the $5,000,000 price tag, Mr. Assaf claims that “it’s worth every penny.” Ms. Smith echoed his sentiments, saying “I simply can’t stand the current situation; the extra set of stairs simply kills my joints, and too many kids use the elevator, so I never get to use it!”

Students seem to be the most excited about the new bridge. “I really don’t like exerting the effort to walk at all, so the moving sidewalk is really up my alley,” said senior Elijah Sheft. Freshman Gunnor Faulk requested that footballs be placed on the bridge, so that the football players can practice during their free periods. “I like the way that Pace listens to all of our requests  – it seems like they really care about us,” he said.

Junior Tori Dancu was much more focused on the arts aspect of the bridge, going so far as to propose that a concert be held there annually, in honor of Dr. Mengert. “He helped shape this school into what it is today, and I think that a chorus concert on the bridge that utilizes its superior sound system would be the perfect way to show appreciation for him,” she said. “I mean, it’s a concert on a bridge… We just need to add some ‘troubled water’ below.” However, the entire upper school student body can definitely agree on one thing about the bridge: not walking in the rain to get to lunch will be superb.