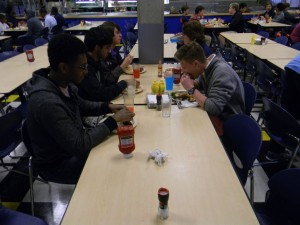 With students constantly forgetting to sign out, numerous complaints from the juniors, and an overall lack of hungry students in the cafeteria, only one decision could be made by the Pace administration: end off-campus privileges. This decision was made after numerous heated discussions with faculty, many of whom had trouble making a decision. “Effective April 1, 2015, Pace Academy has elected to ban off campus for a minimum of five years as a result of inexcusable behavior and incessant complaining,” said Upper School Head Mr. Gannon on finalizing this resolution.

As the news of this horrific decision spread like wildfire around the school, seniors became outraged. “I’m obsessed with off campus. I never eat at school because the endless options outside of Pace are wonderful,” said senior Morgan Baker. “I think that I’m going to starve now since I don’t enjoy the cafeteria food.” Senior Braylin Robinson agreed with Morgan and added: “I just wish that the juniors wouldn’t think about themselves so much; they’ve messed up off campus for everyone.” This decision begs the question, when will off campus be back and what will seniors eat for lunch now?

Senior Scott Eisenberg believes that his only choice for a delicious and filling lunch would be to bring in his own sack lunch. “I really need a protein-filled lunch to help me get big and strong. With all of the working out I do, protein is a necessity,” said Scott. Other options for seniors include eating at the snack bar or scavenging in the school’s cafeteria. Although choices remain limited, students must find a way to quench their thirst and end their hunger. “I’m going to be honest here, I need Chick-fil-A at least three times during the school week, otherwise I”ll go crazy,” said senior Harris Quiner. “And you don’t want to see me crazy.”

Other seniors have responded to the news by crying. Seniors Lacey O’Sullivan and Hannah Kelly were seen bawling their eyes out in the garden over the horrific news. “We don’t know what to do with ourselves now,” Hannah said. Students from other grades elected to not comment out of fear of severe backlash. The lone trailblazer, freshman Gunnor Faulk, had this to say: “Y’all are schleep on the cafeteria food and it’s time for the seniors to eat and respect it.” Among the outrage felt by students, the seniors still have this one bright spot: they only have one month of school left (not a joke).