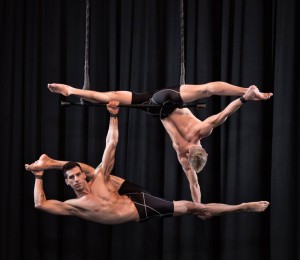 In a shocking turn of events, Pace librarian Matt “El Tigre” Ball has resigned from his position as head of the Woodruff Library to take up his long-standing passion for the trapeze. In his soon-to-be-published tell-all, which was sent to the office of one Lee Wilson last week, Mr. Ball revealed his darkest and most inner secrets, including his thrilling origin story.

Mr. Ball was not always the jolly librarian you have seen every day this year in the Woodruff library. Ever since the small bundle of cloth and baby that is now Mr. Ball was discovered in the 791.3 section of his local library (the circus section), Mr. Ball knew where his affinity lay. “My brother Patt and I actually left Atlanta and the Jesuit monastery when we were 16 to travel the world,” said Mr. Ball. “We spent the following four years traveling through the rough terrain of Papau, New Guinea in order to experience a different culture, and that’s where we truly found our love for the trapeze.” After a four-year run-in with a Columbian drug smuggling cartel, Mr. Ball and his brother continued on to the Trapeze School of New York to harness their aerial skills.

Mr. Ball and his brother graduated at the top of their class and joined the Cirque du Soleil as two of the finest young trapeze artists in the business. It was only two years into their career that a tragic accident involving three particularly rowdy elephants took the life of Patt and permanently ended the duo’s reign over the trapeze. Angry with the world, Mr. Ball ran away from the circus with only the clothes on his back in order to tempt fate with a number of reckless adventures. One near-fatal base jumping accident later, Mr. Ball’s career in danger and adventure was ended with a single torn ACL. Mr. Ball returned to Atlanta and sought to drown his sorrows in countless books and “Desperate Housewives” reruns.

Mr. Ball’s recruitment by Pace Academy allowed him to take his mind off of his lost brother, and for a while, all was well in the Ball household. But now the boat has been rocked with word from the National Board of Circus-related Injury and Death that his brother’s death was actually unconfirmed. Not only that, they had recently gotten word that he was spotted outside of a poetry convention with one Jericho Brown on the outskirts of San Antonio, Texas.

It seems that this news has rekindled a fire in the heart of Mr. Ball, and he has already resigned from his job and cleaned out his office as of March 31. Mr. Ball has left a prominent mark in the hearts of the Pace community, and all will be sad to see him go. Despite his sudden departure, the administration has already made the decision to place Junior Bailey O’Sullivan as acting head of the Woodruff Library, now to be referred to as C6.