Knightly News: Hi Bailey! S0 people say you’re really funny. How do you think you earned that reputation?
Bailey O’Sullivan: Just by being a savage. I don’t just turn it on and off; I’m always on.
KN: In honor of April Fool’s, what’s the best prank you’ve ever done?
BO: That’s a hard one. One time I slashed Lacey’s tires. And I’m not lying.
KN: Wow, was she mad about that?
BO: Yeah, she was pretty lit. It didn’t end well because I got in trouble.
KN: Do you have any special plans for April 1st?
BO: Well, I don’t want to reveal anything, but I do have a bunch of dates, because I go on dates a lot.
KN: If you could be any animal, what would you be?
BO: A bald eagle, because it’s the most American one.
KN: Who is your idol?
BO: Batman. He’s a savage, and makes great movies.
KN: If you could have the life of any other person at Pace, who would it be?
BO: Definitely Mr. Gannon. Just because he gets to call out anyone he wants, and because he’s a savage!
KN: What are your hobbies or favorite activities?
BO: Well, I love rolling down and hanging with dubois, goofing off, and doing anything I’m not supposed to be doing.
KN: Are you excited for school to be almost over?
BO: Yes. Summer before senior year is always savage, so you have to make it count.
KN: How do you feel about Lacey including you in her National Honor Society assembly speech?
BO: I got called out pretty hard. I wasn’t expecting it. It got my ankles. But love her to death; it was really sweet.
KN: What do you talk to four-year-olds about?
BO: I don’t know, whatever they’re feeling. Maybe sports.
KN: How do you feel about Lacey?
BO: She’s not nearly as funny as me. Her jokes are always, like, puns. No one likes puns. But I love her, and since this is my one chance to call her out, I better use it.
KN: Okay, so what do you want the people to know about you and your sister?
BO: I don’t want to say anything mean, but I don’t want to say anything that makes me sound soft. I’ll say that Lacey had a really sweet speech, but there is no sensitive side to me like she said. There is just a tough guy exterior with absolutely no soft stuff underneath. 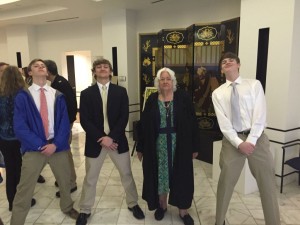 Bailey is “all glowed up” with Dr. K after the NHS assembly. Photo: Bailey O’Sullivan