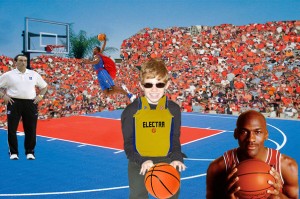 On a chilly Saturday morning at 5:30 a.m., a young flaming redhead by the name of Landon Goldstein artfully hurls the ball towards the basket. He hoists it up, and almost as if by the force of gravity the ball supernaturally is attracted to the orange cylinder. The Pace sophomore has become one of the most coveted basketball recruits in the nation. The 5’4,” 180-pound monster has come out of absolutely nowhere, much to the shock of national coaches and scouts. “It is truly amazing how Goldstein can be so magical with the basketball,” said coach Mike Krzyzewski.”

Landon began his basketball career at Kawaga under the direction of his beloved camp practicing doctor, Dr. Krizzlemann. After dominating both the camp basketball and ultimate Frisbee circuits, Landon made the world-shattering decision of electing to pursue basketball over Frisbee, much to the dismay of his followers. Upon returning to Atlanta, Landon purchased basketball shoes and his infamous Bob Marley bag, then proceeded to spend countless hours at Lifetime Fitness with his buddies Kyle Simon, Jacob Karsch, Mike Sabath, and Zakk Rosenberg. “I met Zakk Rosenberg at Music Midtown, and I knew immediately that we would be boys,” said Goldstein. “We share a similar style, and we always push each other to be better.”

Landon took the next step, enlisting in the BBYO Avitz 2 Dream Team as the backup small forward. After he scored two points in his first appearance, he knew this season would be special. Landon adopted the “run and gun” strategy, and by the end of the season he was inducted by Rabbi Phillip Kranz into the JCC Hall of Fame. Countless numbers of people ventured out to his parents Cary and Jody’s driveway to watch daily practices between Landon and his back court mates Donald Gordillo and Lauren Chang.

As one of the highest rated recruits in the world, college coaches are scrambling to sign this special player. Landon has offers from Syracuse, Duke, North Carolina, and most notably Cloquet Community College in Minnesota. “I’m looking for some place that has excellent Wi-Fi connection so I can FaceTime my beloved girlfriend Sloane Pennington,” said Landon. “Athletic specimens such as myself come once in a lifetime.” With a jump shot like sweet velvet, the “Orange Mamba” is hoping to make a splash at the next level. Every knowledgeable coach in the nation is pursing this hot commodity, and it is only a matter of time before he comes flying off the shelves. In a sport dominated by athletic giants, the world needs a player like Goldstein to change the sport of basketball forever.