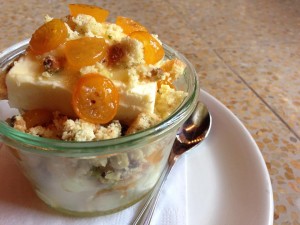 Located in the fashionable and popular Buckhead Atlanta, Thirteen Pies is tucked away along Buckhead Ave. This modernized pizza palace combines chic modern decor with a classic Italian wood fired pizza oven. Originally started in Fort Worth, Texas, Thirteen Pies elected to open up a restaurant in Atlanta back in October. According to our server, the name Thirteen Pies comes from the menu containing twelve pizza options and one pizza that changes every day. The pizza is called “pie” at the restaurant because the crust bakes up somewhat like a pie crust, while the actual slice is thin.

Thirteen Pies stays open for lunch and dinner, and is open every day of the week. In addition to the delectable pizza, they offer pastas, greens/salads and small plates. The small plates usually feature options like calamari, meatballs and fresh riccota crostini. The pizza experience at Thirteen Pies wouldn’t be complete without an accompanying dessert such as Chocolate Flourless Torte or Lemon Mascarpone Semifreddo. The desserts were delicious, and I highly recommend saving room for them. While there, I tried the calamari and the riccota crostini as my small plates, aka “appetizers.” Both plates offered great flavor and large portions.

When choosing between types of pizza, Thirteen Pies serves up many intriguing options, such as the Spotted Trotter Guanciale & Farm Egg, the Good Pepperoni, or Wild Mushrooms & Leeks. While I was there, the special “thirteenth pie” featured prosciutto, blue cheese, caramelized onions and pears. I tried the special and the Good Pepperoni; both were fantastic and packed a flavor punch.

The service was also great, as the food was served in a timely and friendly manner. The manager even gave us our pizza for free because they didn’t “like” the way one pizza came out the first time. Overall, I would rate my experience highly at Thirteen Pies and would recommend this restaurant to all pizza or food lovers.