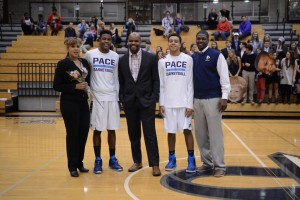 Under the tutelage of Pace coach Demetrius Smith (R) and their father, Rick Holifield (Center), Elijah and Caleb Holifield have excelled on the hardwood this year for the Knights. Photo: Fred Assaf

Few days went by during the summer where senior Elijah Holifield and his freshman brother, Caleb Holifield, weren’t in one of the two Pace basketball facilities. The pair worked hard to be prepared to dominate in the wintertime. Whether it was running countless sprints in the blazing summer heat or completing numerous repetitions of cone dribbling, the Holifield brothers made sure they were going to perform at a consistent, high-level.

Their father, Pace Director of Diversity Rick Holifield, was in charge of ensuring the two were prepared for obstacles that high school basketball has to offer. Along with their rigorous training regimen, the Holifields set out to compete against top amateur competitors on their respective organized travel teams. Elijah played on Georgia’s Southern Stampede, a NIKE affiliated basketball club whose main priority is to extract underrated juniors and seniors and help them get recognition and attention from college programs. Caleb played point guard for Team SCAN, also a NIKE affiliated team that has a history of success on a national schedule.

From hardwood battles in New Orleans, Louisiana to summer showdowns in Myrtle Beach, South Carolina to basketball contests in the Bronx in New York City, the two brothers journeyed from gym to gym to spar against the nation’s elite. “It helped me play against some of the best players in my class,” said Elijah. “It helped me determine what level I was on and what I needed to improve on.” Ultimately, the Holifields experienced overall success and played at an extremely high level this summer. 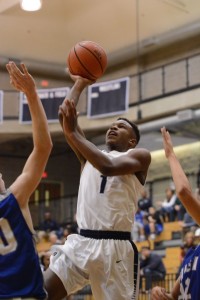 Senior guard Elijah Holifield is averaging 18.5 points per game and is attracting attention from many colleges. Along with his lone offer from Air Force, Elijah has received interest from Coastal Carolina, Gardner Webb, the University of New Orleans and many others. Photo: Fred Assaf

Six months later, the Holifields began to see the fruits of their labor ripen as they took Region 6-AA by storm. Both wore the white and navy of the Pace Academy Knights’ varsity basketball team. Elijah maintained his elite production that he started last year as a junior as he averaged 18.5 points per game during the regular season. In fact, Elijah’s play has been so noteworthy that Air Force Academy head coach Dave Pilipovich was compelled to offer the 6’3 guard a scholarship, his first official offer.

Despite being the backup to senior point guard Elijah Sheft, Caleb has torched opposing point guards with his amazing shooting range and his ability to distribute the ball to the scorers on the team. “The main thing with playing a lot of games is experience,” said Caleb. “The experience teaches you to stay calm and keep composure in critical stretches of the game.” The two brothers have been outstanding, integral parts to the Knights’ 2015 season, one in which the program has celebrated unprecedented success. 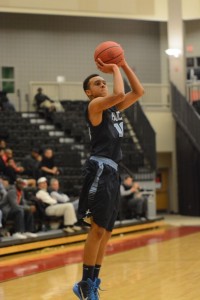 Freshman guard Caleb Holifield has surprised many opponents with his playmaking ability. The future is bright for the Class of 2018 point guard who received Honorable Mention for the All-Region 6-AA Team. Photo: Fred Assaf.

Their father, Mr. Holified, is happy to see his sons enjoy success on the court, while wearing the same colors. “It’s a lot of fun,” said the eldest Holifield, who  spent eleven seasons in professional baseball and understands the rigor and sacrifice that comes with being an athlete. “I know how hard they work and how much time they spend trying to become the best basketball players they can be.” Caleb and Elijah Holifield will stop at nothing to become the best “hoopers” they can be. The brothers were key to the team’s playoff success, as the Knights went all the way to the GHSA Elite Eight in the state championship before their journey was upended by Vidalia High School in a wrenching 46-48 loss on Feb. 25.