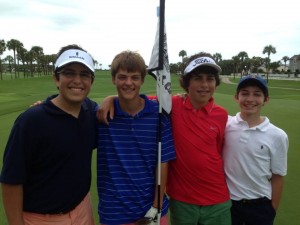 The April sun beats down upon the scalding metal of sophomore Jake Movsovitz’s Titleist 6-iron, as he patiently addresses his golf ball. At a distance of 112 yards from the green, this shot requires the utmost concentration and focus. What “The Big Easy” lacks in distance and power, he more than makes up for with his sheer finesse and his baby soft touch around the greens.

Countless hours of training and effort during the off-season with his beloved coach, Denise, have culminated in this moment. He takes one last breath, transfers all his being into the club, and sends the ball into the green-side bunker. “I’ve often been compared to a much doughier Camilo Villegas,” he said.” Although I have some faults in my game, I am really looking forward to this upcoming season and bettering myself as the entire team improves.”

In the upcoming season, the Pace boys golf team hopes to build upon the success of last year. Although the team is composed heavily of newcomers and the loss of Class of 2014’s Tripp Conrad hurts the squad’s depth, promising players such as sophomores Alex Ross and Jack McMillin, and freshman Marc Mitchell will add future strength. In the face of adversity, coach Bailey Player’s immediate goal is for every member of the team to steadily improve while playing the game they love. “Our main goal this year is to foster a positive team climate and to generate a level of integrity and respect for the game in each and every player,” said Coach Player. “We would of course love to win region, and hope to do so, but even more important is that everybody looks forward to each practice and match, doing honor each and every day to the game of golf.”

Simply labeled “Dem Boyz” the boy’s golf team will be nailing some fairways and scoring some birdies this upcoming season. Iconic shots of the team are junior Jack Dwyer’s patented slice fade and sophomore Barrett Baker’s classical snap hook. As a young and rambunctious group of student-athletes, every player’s individual improvement is the ultimate signal of success.

The Pace girls golf team, although often overshadowed by its male counterpart, also is striving for success and improvement in the upcoming season. Led by senior captain and Pace Academy golf mogul Julia Beck, this collection of golfers also wants to build upon the success of last season’s team. Experienced and savvy, the team seeks leadership from fellow senior Moriah Wilson, and juniors Hope Lennox and Elise Bradshaw. Guidance this year will be essential, as Christy Ellis, the previous team coach, has been replaced by the duo of Kevin Ballard and Tim Walsh. Although the team is laden with upperclassmen, the squad has only sent one golfer, Julia, to the state tournament the past two years. Although the hope of the coaches is for each member of the team to have fun playing the game they love, an increase in the number of golfers at the state tournament is definitely expected.