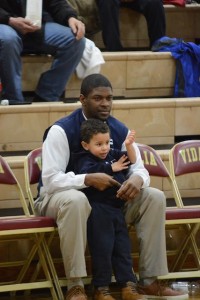 In front of a raucous Vidalia crowd on a wet and rainy Thursday night, the Pace Knights played their hearts out in the tense environment of a GHSA Elite Eight game. However, it turned out not to be enough, as Pace fell to Vidalia, 48-46. Pace dominated the beginning of the game, going up by 6 points at the end of the first quarter. The Knights fell behind 30-23 at the start of the second half, but went on a 9-2 run to tie it at 32 all. Pace was leading 38-37 going into the fourth, but ultimately couldn’t hold on to the lead, as Vidalia’s Jordan Black hit two free throws with 15 seconds left to seal the game for the Indians.

Wendell Carter Jr. had another monster game for the Knights, as the Indians simply didn’t have the size to contain the big man in the paint. However, Pace had a tough time feeding the ball to Wendell, as he was consistently double-teamed every time guards Waide Swain, Elijah Sheft and Caleb Holifield looked his way. The Indians disrupted the Knights offense, focusing on putting pressure on the ball carriers instead of getting back on defense.

This fast-paced style of defense countered their slow style of offense, as the Indians often held the ball on the perimeter for more than 30 seconds before making their move towards the basket. Floaters and 3-pointers killed the Knights, as it neutralized Wendell’s height and shot-blocking ability in the lane. Pace’s offense mostly consisted of a healthy mix of 3-point shooting and slashing to the basket, but the Knights were mostly silent from the 3-point line except for two key Waide Swain threes late in the game.

The Vidalia crowd was loud throughout the game, and even vulgar according to some reports. The Pace student section was constantly yelled at by not only students, but even parents and other residents of Vidalia. The entire Pace community was disappointed with the behavior of the opposing crowd.

Make sure to check the Knightly News website for future updates about upcoming spring sports.