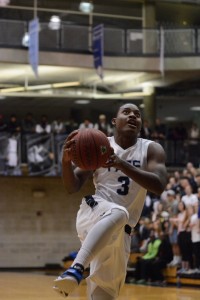 The home game was fairly competitive in the first quarter. Spurred on by a raucous fan base sporting their team colors of navy and scarlet, the team from Barnesville commanded the lead in the opening minutes. Led by 6’3″ high-flying power forward Obtavious Hampton, the Trojans raced to an 8-2 advantage. The Knights went on a rugged 8-0 run to close out a 10-8 first quarter as senior guard Elijah Holifield and sophomore forward Wendell Carter, Jr. attacked the paint and got buckets.

The third quarter marked the commencement of an onslaught that saw Pace outscore the Trojans 38-22. Carter, the Region 6-AA Player of the Year, began to dictate the flow of the game with his inside scoring and defensive dominance, blocking an outstanding seven shots. The dagger in the collective hearts of Lamar County was Carter’s devastating one-hand windmill dunk that threw the crowd into a frenzy, in which Knights of the Round Table members began to tackle one another and chant in excitement.

Junior Zack Kaminsky added 11 points as he hit his usual 3-pointers and played defense at a high level. Elijah Holifield had a career-high 10 rebounds as he used his 6’3″ frame to dominate the Trojan backcourt in the paint. Ultimately, the skill level of the Knights tamed the athletic ability of the Trojans in the Sweet Sixteen matchup. 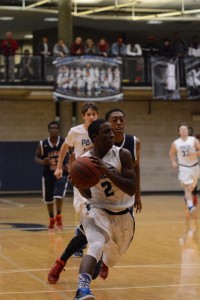 Pace now faces the winner of tonight’s matchup between the Eagles of Coosa High School and the Indians of Vidalia High School. Both are teams with 20-plus wins, and both will pose a significant threat to the Knights’ 20-game winning streak. Should Coosa win, the Knights will play for the last time this season at the Inman Center before the Class AA playoffs scene shifts to Columbus State University.

If Vidalia wins, representatives of both schools will have a coin flip to determine who will host the Elite Eight matchup against the two #1 seeds. The Knights will continue their playoff journey in the Elite Eight. The question is: Who will the Knights have to conquer to advance to the Class AA Final Four?