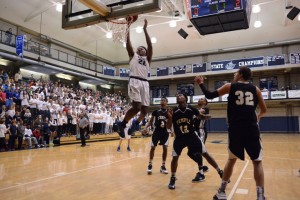 Sophomore Wendell Carter Jr. flies in for a dunk in the first round of the state playoffs against the Temple Tigers. Photo: Fred Assaf

In their consummate demolition of the hapless Temple Tigers on Wednesday night, the Pace Knights showed how they went undefeated in Region 6AA and why they are widely ranked number one in the state in Class AA. Pace defeated Temple High School 63-35, riding a big first-half lead to advance to the Sweet Sixteen of the GHSA Boys Basketball State Playoffs.

The Knights jumped out to a commanding 20-0 lead in the first quarter, fueled by domination on both ends of the floor by sophomore Wendell Carter, Jr., before the Tigers notched their first bucket of the game. Pace looked indefatigable in their efforts to deny the Tigers any offensive opportunity, while they consistently scored the rock on the other end of the floor, both inside the paint and from 3-point range.

Coach Smith’s team then went on another commanding run, and a circus shot by Wendell made the score 49-10 at halftime. Coach Smith rested his starters for most of the second half in anticipation of Saturday’s second round game against Lamar County, and sophomore Barrett Baker and senior Philip Markwalter led the second unit in closing out the game for the Knights.

The Tigers ran their offense through Rashaan Dobbs and 6’7″ Peyton Applegate, but senior Elijah Sheft’s tough perimeter defense and Wendell’s physical presence stifled any attack the Tigers could muster. On the other end of the floor, great passing on the outside led to zone-breaking, wide open shots from junior Zack Kaminsky and senior Elijah Holifield. Wendell, the recently crowned MVP of the 6AA region, finished as the Knights’ leading scorer with 24 points, while the elder Holifield brother poured in 16 points.

An important aspect of the game was the Pace student section, which was three sections strong in the Inman Center for Wednesday night’s game. Decked out in white, “The Court is Our Castle: Welcome to the Dungeon” T-shirts handed out to students for free during the day, the noise and ferocity of the section intimidated Temple into making mistakes under mounting pressure.

The Knights continue their march on the Road to Macon this Saturday in the Inman Center at 4:30 p.m. against Lamar County. Be sure to come out or watch on KnightFlix, which can be accessed from the homepage of the Pace Knightly News website, www.knightlife.paceacademy.org/knightlynews.