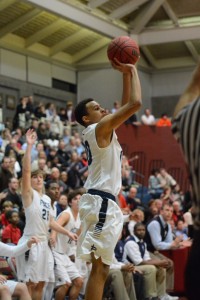 In basketball, the mark of a battle-tested, championship-ready team is its ability to manage obstacles and overcome adversity. When a team crumbles in the face of these situations, it’s most likely that it wasn’t ready to meet and capture success. A team that can handle the calamities, mental or physical, that occur within the 94-foot court is a team that can meet and conquer any challenges that the playoffs have to offer. The Pace Knights proved to be the latter, as they pulled out a heart-stopping 66-63 victory over the Greater Atlanta Christian Spartans and won the program’s first region championship since 2011.

The word “adversity” is often overstated in many descriptions of past sequences and games. However, in the event that you lose two of your best scorers (senior Elijah Holifield and sophomore Wendell Carter, Jr.) to foul trouble, receive a bench technical foul, and face a double-digit deficit in the first quarter, it’s safe to say that adversity has kicked your door down. How the Knights responded determined the outcome of the rest of the game.

The Knights welcomed the challenge offered by the hot-shooting Spartans as they outscored GAC 19-12 in the second quarter. Junior forward Zack Kaminsky provided a scoring spark in the absence of Holifield and Carter, while freshman center Jonathan Rushton did a masterful job controlling the paint and pulling down rebounds. A Waide Swain three-pointer off a Kevin Johnson, Jr. assist cut the GAC lead to one point as both teams went into the half.

The Knights had to use patience and precision on the offensive end as the long ball was not falling. Meanwhile, GAC guards Garrett Covington and Brian Coffey were heating up from mid-range. Kaminsky scored 15 of his 18 points in the second half by post moves against smaller defenders and connecting on the three-ball. The Knights achieved a four-point lead at the conclusion of the third quarter. However, GAC coach Eddie Martin prepared his team to execute and compete in the critical fourth quarter.

After the two teams went back and forth, the elder Holifield buried a three off a pass from his younger brother, Caleb. GAC responded as Spartans forward Jared Hoffman connected on two huge three balls to give GAC the lead, 61-58. Later, following a GAC turnover, Elijah Holifield drove to the lane and connected on a bank shot. Meanwhile, as everyone in the crowd focused their attention on the scorer, the unnoticed event was Spartans forward Eric Jamison holding onto Carter. A foul was called on Jamison and two shots were awarded to Carter, who sank both of them. The Spartans responded with a Brian Coffey floater over the outstretched arms of the 6’9″ Carter, setting the stage for an incredible finale.

After a dysfunctional twenty seconds in which the Knights were totally unorganized on offense, the ball ended up in freshman Caleb Holifield’s hands. Despite struggling throughout the region tournament, Caleb wasn’t phased by the moment and called for a screen from Carter. Calmly, he took one dribble and buried a go-ahead jumper to give the Knights a 64-63 advantage.

With 17.6 seconds to play, the Spartans’ Cameron Boyd missed a 23-footer, and Carter came up with the rebound and was quickly fouled. Carter hit both free throws, making the score 66-63. With 6.9 seconds left, the Spartans were unable to score on their final possession, thus ending GAC’s chances at a seventh straight region championship. The Knights celebrated with fans at center court before collecting the Region 6-AA trophy. After their exceptional performance, the Knights’ record improved to 25-2.

The Knights now look to continue their success heading into the official playoffs, the GHSA’s Class AA Round of 32. They will host the 15-11 Tigers of Temple High School, a Region 5-AA team led by first-year head coach David Cottrell and senior point guard Rahsaan Dobbs. The Knights will host an official playoff game at the Inman Center for the first time since 2011, a playoff contest in which Pace defeated Aquinas High School 93-58. Come and support your Knights as they battle Temple at 7:00 p.m. at home on Feb. 18.