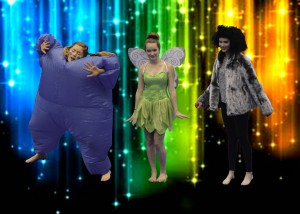 The Spirit Week edition of Three Looks honors three girls from the 2015 performances who pulled off the best and most memorable costumes despite stressful rehearsals, working on decorations and trying to complete homework with little-to-no sleep. They are freshman Melanie Crawford, sophomore Willie Lieberman and senior Caillin Cooke.

Starting off the entire Spirit Week performance for freshmen is never an easy task, but Melanie as Cruella De Vil certainly pulled off a memorable outfit. Cruella De Vil’s wig was the most notable piece of the “101 Dalmatians” costumes. “It was fun getting into the character of Cruella De Vil, and yeah, my favorite part was my wig,” said Melanie. Melanie’s attitude and outfit brought a star quality to her grade’s dalmatian dance and secured her place in this edition of Three Looks.

As if gyrating in front of Mr. Gannon wasn’t enough, Willie, portraying the blueberry gum side of Violet Beauregarde from “Charlie and the Chocolate Factory,” was also chosen as one of Spirit Week 2015’s top three costumes. “The whole process was spiritually invigorating, and I could let my creative juices flow,” Willie said of being a blueberry. Her costume, though simple, was an extremely accurate blue sumo suit from the nearest Party City. While being interviewed, she glowed about the costume’s huge success. Willie is a great example of how it’s the subtleties of an outfit that bring out the “pop” in bubble gum. “I had a lot of fun and definitely helped Brian [Sloan] take everyone to the candy shop,” she said.

Even with a long night of dancing and decorating, senior Caillin Cooke still flew her way into this Spirit Week edition of Three Looks as Tinkerbell from “Peter Pan.” Sporting her classic green-on-green tutu and leotard, this fairy is not afraid to flaunt a little in front of the Pace Academy student body. “My motto is faith, trust and pixie dust, especially in fashion,” said Caillin. “Oh, but please don’t note in the article that the outfit was a little scandalous!” Caillin’s confidence shows how comfortable she is dancing in front of the entire school in her leotard. The seniors flew into first place for costumes this year with Caillin as Tinkerbell. “She was just too good,” said fashion expert Mr. Hornor.