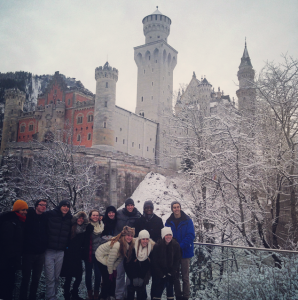 Twelve Pace seniors departed from Atlanta on Jan. 10, bound for Germany to start off the new year. The group began the trip in Munich, an extravagant city featuring plenty of tourist activities, such as the famed Oktoberfest festival and of course, copious amounts of history. The students, along with Mr. Hornor and Mr. Whyte, set out to explore the beautiful Bavarian state for the first half of the trip.

Here in Atlanta we have yet to see snow this winter, but the forecast in Munich featured plenty of flurries, providing elegant scenery that complemented the baroque and rococo architecture styles that Munich is known for. “I am in love with the (ro)coco,” said senior Maggie Inman. In Munich, students were able to experience the Bavarian culture by spending a night at the Bavarian State Opera.

After touring the more urban part of the city for the first couple of days, the group took off to more pastoral scenery in transit to the Neuschwanstein Castle, which is Walt Disney’s inspiration for the renowned castle of Sleeping Beauty. “My favorite part of the trip was our lunch on the mountain at Neuschwanstein, despite having to pay for the restrooms,” said senior Sarah Smith. On the fourth day, the group toured the Dachau concentration camp and learned about the history of Nazi Germany.

After taking the full tour of Munich, the group left for the capital of Germany: Berlin. In Germany’s most populous city, students visited the Brandenburg Gate, Checkpoint Charlie, Hitler’s bunker, the Reichstag, the Pergamon Museum and the Berlin Philharmonic Orchestra. “My favorite part of the trip was the symphony in Berlin,” said senior Corinne Orr. “The music was simply incredible and magical.” The city carries extensive historical context that students were familiar with before they got there, but physically experiencing the culture provided insight that one would not be able to gain just by reading a textbook. “Seeing Hitler’s bunker was especially moving,” said senior Matthew Seaman. “It’s hard to imagine one place with more historical influence.”