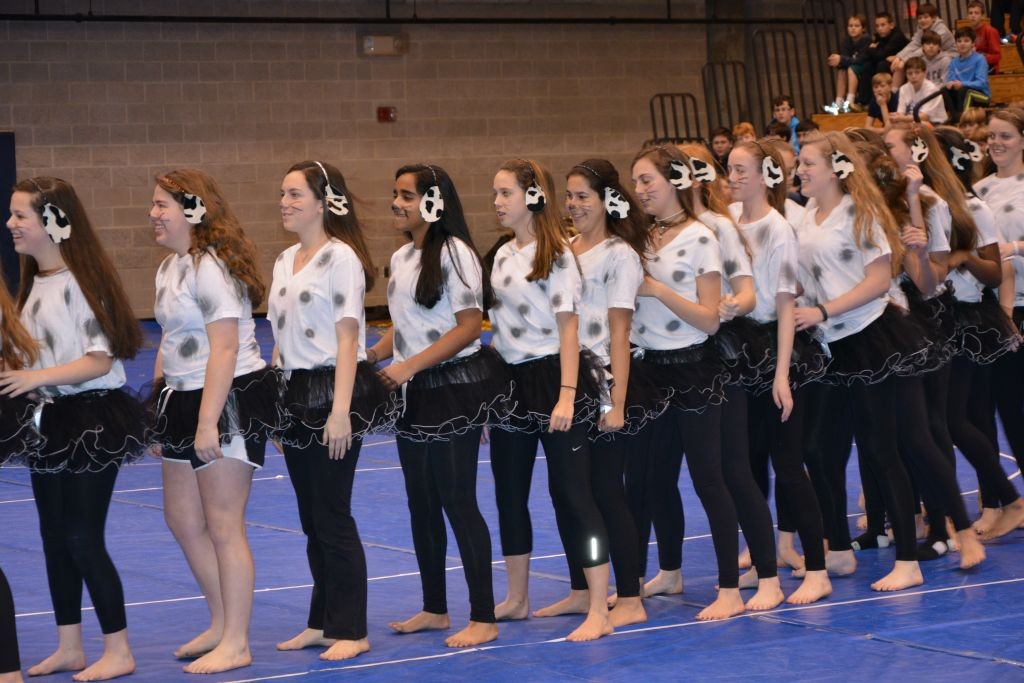 Freshmen did a great job with their “101 Dalmations” theme. Photo: Lee Wilson

Although the freshmen came into their first Spirit Week fighting the odds of an almost definite last place, the Class of 2018 was not half-bad in their inaugural year. Even if they were awarded fourth place in the end, the young bucks did a nice job delivering their cute theme of “101 Dalmatians” through their creative garden decorations and well-choreographed dance. It wouldn’t have taken much to beat last year’s freshman decorations of inflatable animals and flimsy streamers that ended up leaving the trailer quad a mess. This year’s freshmen had few decorations but used their space well with dog crates, balloons and cutouts of characters from the movie.

As for the most important part of the week, once again, the freshmen outshined the Class of 2017 considering their freshman dance from last year. Class of 2018 did a good job incorporating the characters into their dance and combining older moves with modern dance moves. “Caleb Holifield twerked better than anyone I’ve ever seen,” exclaimed Knightly News adviser Ms. Wilson. “I’m not sure if that’s good or bad.” At the end of the day, the Class of 2018 finished with an overall rating of decent – better than most freshmen Spirit Week performances – that also leaves them plenty of room for improvement in their three years to come.

As freshmen, the Class of 2017 “didn’t have a totally successful Spirit Week,” as current senior Julia Beck reported in last year’s Spirit Week review edition of The Knightly News. This year, others began to think that it would be a repeat year for them when they were unable to spell the word “sophomores” correctly on their Spirit Week class t-shirt. Regardless, the Class of 2017 ended up pulling off one of the best sophomore dances since last year. When people look back on their performance in years to come, everyone will remember the dance moves of the sexy and slithery Brian Sloan as the infamous Willy Wonka. “I just try to give the people what they want,” said Brian. “My one and only intention was to take every person in the room to the Candy Shop.”

Knightly News honorable mention goes to the gyrating blueberry, otherwise known as Willie Lieberman. The sophomores also managed some very creative and extensive decorations, transforming almost every part of the cafeteria into a different part of Willy Wonka’s very own Pace Academy chocolate factory. With an all-around strong week of nice decorations and an entertaining dance, the Class of 2017 improved tremendously from last year. We can’t wait to see what’s next for them.

Although “The Hunger Games” was a predictable theme for the junior class, the odds were ever in their favor. The red carpet (even though it only lasted through first period) added an outstanding dramatic effect to the decorations in Inman. The Class of 2016 succeeded in transforming Inman into three sections: The Capital, District 12 with drying lines of clothes across the ceiling and bread on the tables, and The Arena which was brought to life with real trees and “nightlock” on the table. Students’ hearts broke as they walked by Rue’s floral burial site. “The Hunger Games” was an excellent choice, especially because the third movie came out recently.

Painting faces of people is challenging; however, the junior class walked away with second place for their banner. The mockingjay drew the most attention in the middle of the banner due to its intricate design.

The juniors’ morning video and dance were both very entertaining. Choreography for the morning dance had students and faculty on the edge of their seats as girls were lifted into the air. The morning video produced many laughs, especially Jack Zook’s impression of Mr. Fleming.

The Class of 2016 strived to beat the seniors in the morning costume contests, and they came extremely close. They definitely excelled in their costume contributions during assembly, specifically the large group wedding with Wallis Ohlhausen and Bailey O’Sullivan as the bride and groom. If they put as much effort into their Hunger Games costumes as they did during morning assembly, the costumes would have turned out better. To be fair, their theme was a more challenging concept to depict than cute dalmatians and the cast of “Peter Pan.” Effie Trinket’s purple eye lashes (on Retta Carolin) stood out to add more pizzazz to the colorful group of Capital girls, and everyone enjoyed Seneca Crane’s beard (Ethan Robinson) and Caesar Flickerman’s ponytail (Nicholas Kratz).

People had high expectations for the juniors’ dance after last year’s “Lilo and Stich” themed performance. Sydney Sommerville and Jean Luc Brown continue to awe the audience with their leadership in choreography. This class is especially talented at dancing in sync, which is quite difficult to accomplish.

As expected, the Class of 2015 blew everyone away during Spirit Week. This class has always impressed with exceptional decorations, costumes and dances since they were freshmen. “Peter Pan” was certainly a magical theme for the seniors to choose. Overnight, they transformed the school into an outstanding Neverland. Students and staff were in awe as they ducked their way through the hallways of the Arthur M. Blank Upper School. The stairs were joined with endearing cutouts of smiling lost boys, and the walls were soaring with silhouettes of the characters.

Excitement in Inman was palpable when the seniors prepared to uncover their banner. The unveiling did not disappoint, as the seniors’ Spirit Week banners from the last three years fell away to reveal their “Peter Pan” banner glittered with pixie dust and an incredible illustration of both London and Neverland. It is fair to say that everyone was amazed by the banner’s artistry and sheer scale. Shout out to Carolyn Propst.

Both students and staff looked forward to seeing the seniors’ morning video, and no one was left disappointed. Senior Jeri Brand definitely had the audience tearing up with laughter. The comedic video was a job well done with kudos going to Captain Hook (Matthew Tanenblatt), Smee (Sam Nail), and John and Michael (Cooper Peery and Harris Quiner). The seniors’ video certainly met expectations, especially the second half.

The seniors’ morning dance was magical. Curtains opened to reveal Peter Pan (Cooper Drose) flying through clouds of smoke onto the stage. The girls’ morning dance was full of hips, sass and pixie dust. The couples dance had the audience at the edge of their seats cheering.

The senior class always excels with their performance. The leads were chosen perfectly, the costumes were very cute and the group dances had everyone cheering from the bleachers. The most unique and entertaining aspect of the seniors’ dance was how they incorporated all of their finales from past years.