Snowpocalypse: Students Look Back While Hoping for More Snow in 2015 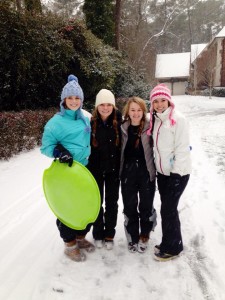 It’s that time of the year again. Students continually check the weather forecasts on their phones and shouts of, “There’s a 20% chance Thursday night!” ring out in the hallways. With Atlanta’s poor preparation for snow and ice, an inch of snow or a cold freeze one night can cancel school for up to a week.

Last year, this lack of readiness manifested itself when an inch of snow blanketed Atlanta and chaos ensued. Drivers were stranded on the roads for hours, with many of Atlanta’s drivers not having any experience with driving on snow and ice. Some students, leaving Pace at around 12:30 p.m. thanks to early dismissal, did not arrive home until midnight or even early the next morning.

Over the next few days, the entire country looked upon Atlanta as a laughingstock for its inability to clear the roads of the small amount of ice and snow. Pace students, however, paid no heed to the crisis and proceeded to enjoy their snow days. Some went out and sledded on the nearest hills they could find, while others simply stayed warm inside and enjoyed hot chocolate.

While these breaks cause scheduling headaches for school administrators, they provide nice breaks for students during a fairly hectic time of the year. “I like to go to my local park and play hockey with other kids in my area, and the extra sleep is always nice,” said junior Samuel Sloman. “I take the wheels off my skateboard and ride it like a snowboard,” said sophomore Alex Kaye.

Senior Nora Harlin loves snow weeks because she simply “doesn’t have to go to school.” Teachers, on the other hand, don’t love snow weeks as much as students. “I hate them [snow weeks], but there’s really nothing we can do about them,” said Ms. Barbakow, with a resigned stance to the weather phenomenon. Ms. Smith took a brighter approach to the ice-induced holidays: “They’re inconvenient and costly, but they do give students long periods of time to do homework thoughtfully and carefully, without having to be interrupted to drive to school.”

The 2015 Farmer’s Almanac predicts that there will be “near- to above-normal snowfall” in the Southeast region this winter, so students, teachers, and administrators should be prepared for the possibility of snow and ice.