In Love With the Cocoa: Chocolate on Valentine’s Day 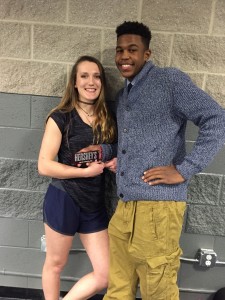 An especially passionate feeling of love permeates the highly anticipated date of Feb. 14. Valentine’s Day is an opportunity for the ultimate display of love. This day has become a contest for partners in relationships to show their significant others how much they care, often with material gifts. Presents range from new cars to gift cards to bouquets of flowers. However, one special treat can be guaranteed to be given on Feb. 14: chocolate. Whether it’s stashed in a box or carved into the shape of a heart, chocolate is the most superior Valentine’s Day offering since the 1800s.

In the 1840s, Victorians became enamored with exchanging special gifts involving candy rather than illicit sexual acts. Prior to that, the idea of candy-related gifts was unprecedented and it was more common for men to give women roses and sing songs to demonstrate their love. Richard Cadbury, born into a British chocolate manufacturing family, saw an opportunity to take advantage of Feb. 14.

Mr. Cadbury decided to make adjustments to the company’s chocolate making techniques. By doing this, he extracted pure cocoa butter from whole beans, which he used to produce many more varieties of what was then called “eating chocolate.” Mr. Cadbury recognized a great marketing opportunity for the new chocolates and started selling them in beautifully decorated boxes that he designed. With this new product on the market, the commercialized holiday known as Saint Valentine’s Day became known for the exchange of different varieties of “eating chocolate.”

Here at Pace Academy, the gift of chocolate on Feb. 14 will be a popular one, as students seek to display their love for their significant other. Junior Jack Dwyer hopes to surprise his junior girlfriend Paige Williams on the holiday. “I can’t wait until Valentine’s Day,” said Jack. “I’ve decided that I’m going to give her some dark chocolate.”