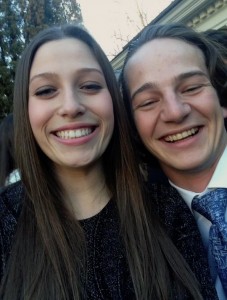 Maria and her boy toy “The Flying Dutchman” pose for the cameras before a night of romance
Credit: Maria Grenader Facebook

Feb. 14, 2015, a young, beautiful Russian woman hopelessly gazes upon her life-sized shirtless Vladimir Putin photo crudely glued to her ceiling. The smell of beets and love is in the air as this available bachelorette despondently spends another Valentine’s Day alone. This is Maria “The Beast of St. Petersburg” Grenader, or as some call her, Mark’s sister.

This untamed gem has officially brought “sexy back” to the Academy, and she will leave you saying, “Oh boy! Russia has never been this hot!” The male savages of Pace are all rushing to get a shot at Maria, but they will have to be ultra-smooth in order to reel in this extraordinary catch.

“I feel like men are intimidated by my luscious Slavic cheek bones. They have made some men go insane,” said Maria. “I just need a man who I can have long discussions with in ancient Russian while we both sit in a hot, steamy Russian bath.” An avid fan of slam poetry, Maria spends many of her lonesome nights sprawled by an open fire on a fur carpet listening to the timeless words of Jericho Brown. “Any man who can recite Jericho Brown’s poetry to me properly is a man for me,” said Maria.

However, it requires more than a silky poetic voice to reel in this Russian vixen, as her men must also “have teeth and a voluptuous man bun.” In the past, rumors have circulated about an epic love triangle between Maria, sophomore Parker Payne and senior Hajo “The Flying Dutchman” Smulders.

“I used to be going steady with Parker; however, ever since Hajo adopted the man bun strategy he has been all I have seen,” said Maria. “He shares all my favorite root vegetables: potatoes, beets, turnips, and more potatoes.” After hearing of these legends, I decided to sit down with the myth myself for a brief interview in the Mr. Matt Ball Memorial Library.

KN: What moisturizer of choice do you lather yourself in to maintain your baby soft skin?

MG: The soft skin mainly comes from eating the vegetables from my family potato farm, which really helps repair my skin. But when I do use moisturizer, I often lather myself in Egyptian creme or ketchup.

KN: Interesting. As a woman of fine tastes, what are some of your hobbies?

MG: I often sit in my garden with my beloved Hajo, stroking his man bun as I tend to my tulips.

KN: What is your view of the Filipino carnival workers mistreatment of show elephants?

MG: I love any living being, humans and animals alike.

KN: Are the rumors true that you are in love with the cocoa?

MG: Positively yes, I am cuckoo for all kinds of cocoa.

KN: If you were stranded on an island, what are three things you would take with you?

MG: I would take an EZ Bake Oven, a lifetime supply of Hellman’s mayonnaise, and my copy of “The Communist Manifesto.”