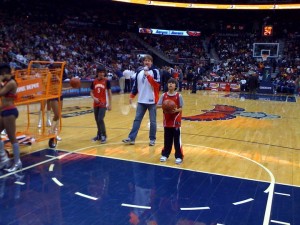 The Atlanta Hawks are finally making national headlines with a 42-9 record, having gone 21-2 since Dec. 26 (as of Feb. 7). The team’s starting five – DeMarre Carroll, Al Horford, Kyle Korver, Paul Millsap and Jeff Teague – were recently named co-Kia Eastern Conference Players of the Month, with a 17-0 record for January. This is the first time in NBA history that five players have shared the award.

To top it off, Coach Mike Budenholzer was recently named NBA Eastern Conference Coach of the Month for the second straight month. The Hawks were power ranked 1st in the NBA after their win streak hit five games in a row (ending at 19 in a row with a 110-115 loss to New Orleans on Feb. 2).

“The Atlanta Hawks are a great team this year,” said sophomore Jake Movsovitz, local Hawks enthusiast. “The team has finally adjusted to head coach Mike Budenholzer.” Before the 2013-2014 season, the Atlanta Hawks hired the former Spurs assistant as their new head coach. After a very mediocre performance last year with a 38-44 record at the end of the regular season, the Hawks are flying high.

In past years, the Hawks have suffered from a lack of attendance at home games, but many fans have now jumped on the bandwagon, with home games selling out. The Hawks have been called the Spurs of the East due to their great defense and deep roster.

“The great thing about the Hawks is that if one of our players gets hurt, we will always have a competent backup to fill in,” said junior Alec Rogers. “For example, Dennis Schröder played great in place of Teague back in December and Pero Antic filled in nicely for center Al Horford in late December.”

The signing of Kent Bazemore, Adrian Payne and Thabo Sefolosha before the start of the season has helped the Hawks tremendously on the defensive front and further strengthened their roster. Sefolosha is renowned as the Hawks best defensive player and replaces Kyle Korver on the court when defense is the priority. Fans have high hopes that the Hawks will continue their success, with maybe even an NBA title in the postseason.