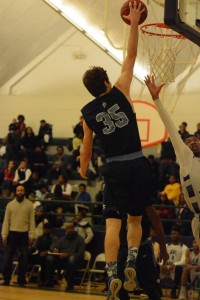 The date was Feb. 15, 2014. The final game played out at 805 Mount Vernon Hwy. in Atlanta inside the home gym at Holy Innocents’ Episcopal School. At the game’s conclusion, the scoreboard read 91-71, in favor of the arch-rival Bears. The Pace Knights’ season was complete in an utterly disappointing fashion.

Now seems like an eternity from then. The Pace Academy basketball program has been revived, reinvigorated and rejuvenated and now they stand at the top of the totem pole in Class AA. Five days from a year ago, the 2013-14 Knights were an insignificant afterthought of mediocre proportions. The 2014-15 Knights are anything but.

Heading into this year’s region tournament, the Knights are carrying a boatload of confidence instilled in them by a coaching staff led by fifth-year head coach Demetrius Smith. “Honestly, more people take it seriously this year,” said junior guard Mick Assaf. “The guys on the squad really feel like we can reach our potential and win ballgames this year.” Now the Holy Innocents’ main gym will be the site where the Knights begin their road to the state championship.

Around Thanksgiving of 2014, the Knights’ success began at this same venue for the annual Holiday Hoopsgiving Tournament as they took on elite, powerhouse programs from the plateaus of Utah to the grassy hills of the Carolinas. Relatively unknown to the high school basketball scene, the team from the small, independent school in Atlanta showed they could compete with the best teams in America. Despite being unranked, they set their sights on being the alpha dog of Class AA basketball.

Following wins versus next-door neighbor Lovett and former Class A rival Paideia, the Knights took their talents to Norcross to battle the Spartans of Greater Atlanta Christian. With four starters scoring in double digits, the Knights pummeled GAC 73-57 and put the Georgia high school basketball world on notice. From that point forward, the Knights roared to a 23-2 record overall and a 14-0 record in the region. They have a great foundation to attribute their success to.

“We play as a team,” said sophomore guard Mark Sommerville. “We share the ball on offense and we play unselfishly on defense. Most importantly, we focus on the little things and key details. That makes us the team we are.” The foundation, however, is not complete without excellent players on the roster. Leading the team in four statistical categories (points, rebounds, blocks and field goal percentage), sophomore forward Wendell Carter, Jr. has anchored the Knights in the paint and provided an unmatched presence shaped by undeniable skill and intimidating force.

Junior forward Zack Kaminsky has become a hot commodity for his efficient jump-shot and enigmatic game faces, and senior guard Elijah Holifield has torched opponents with a variety of ways to score and his critical plays in crunch-time, including two game-winning jumpers. Along with the Academy’s “Big 3,” the Knights have developed a valuable supporting cast that is an integral part of the team’s success. The sky is undoubtedly the limit for a team with as much talent, work ethic and unselfishness as the Knights have. There is no denying their potential.

Potential must be turned into a reality at this point. The powerful statement that has been the 2014-15 regular season cannot be completed with a question mark or a period. The only appropriate way to finish such a remarkable season is with an exclamation point. As the schedule carries them into the 2015 playoffs, its time for the Pace basketball program to rise to the occasion and pursue their most coveted goal. The Knights have their sights set on playing in March in Macon, the site of the GHSA Basketball State Championship.

Come support your Knights during the region tournament as they battle the Lovett Lions at 8:30 p.m. at Holy Innocents’ Episcopal on Thursday, Jan. 12. If the Knights win, they will play Friday night at 8:30 in the region championship game against the victor of the game between Greater Atlanta Christian and Holy Innocents.’ If the Knights lose, they will play a consolation match at 5:30 against the loser of the aforementioned game. Go Knights!!